It’s bigger and better – but has rough-roader really grown up? 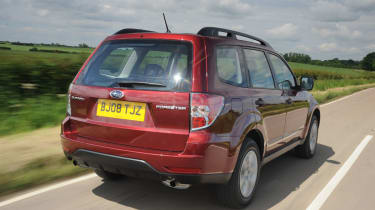 NO gimmicks, just go-anywhere abilities. Subaru’s original Forester was always a curious choice, yet felt immediately at home in a rural area.

One thing it lacked, though, was practicality. To become a bigger player in the SUV market, the Forester is now 75mm longer, 45mm wider and 110mm taller than before. However, in entry-level trim, it’s no more stylish than its predecessor. We’ve got no problem with having durable steel wheels when they’re covered with alloy-style plastic covers like the ones seen here, but the black plastic door handles and bland lines of the Subaru are forgettable next to the Captiva.

Inside, there’s no mistaking that this is a Subaru. Determined to follow its own path, the firm refuses to follow modern trends, instead producing its own brand of superbly built, but old-fashioned, cabins.

The garish blue trim on the dials is like something from a past decade, while the sound system’s double DIN slot looks dated when most rivals offer fully integrated stereos. Even the Eighties-style seat trim is a letdown. Despite Chevrolet’s budget image, the Captiva’s interior has a much more pleasant design. The Subaru claws back some ground with its admirable fit and finish, while those in the back also have plenty of space. All four seats are mounted low – again giving the impression that the Forester would rather be an estate – which provides stacks of headroom. The 760mm legroom measurement is also generous, beating the Captiva here by 10mm.

There’s less space for luggage, however. The Forester’s load bay is shallow – a compromise which is demanded by the welcome full-size spare wheel. Measuring 920mm long and 1,070mm wide, the Subaru offers 450 litres of space – only 15 litres less than the Captiva.

The big shock comes under the bonnet, where you will only find a petrol engine! While rivals sell diesels by the bucketload, Subaru’s new boxer oil-burner has yet to be added to the Forester. And you won’t find the turbo unit from the Impreza here, either.

Instead, the SUV has to make do with a normally aspirated 2.0-litre flat-four powerplant. Start it up, and the engine is much quieter than the clattery diesel in the Captiva, although there is the occasional shudder through the body, thanks to the horizontally firing cylinders.

On the move, the 148bhp petrol engine is less impressive. There’s scarcely enough grunt to shift the Subaru’s weight, and the engine is slow to react to throttle inputs.

Thankfully, the Forester redeems itself in other ways. Its relatively smooth ride means it’s more comfortable than the Chevrolet, while twisty roads reveal hints of the chassis know-how that has made the Impreza a hit with driving enthusiasts. That shouldn’t come as a surprise, as the SUV is based on the same platform as its smaller stablemate.

The Subaru is capable of swift cornering. It has a tendency to slide gently around bends rather than lose grip at the front and plough straight on. This gives the Forester a significant dynamic edge over the Captiva.

Feeding power to all four wheels – and the fact it’s equipped with a low-ratio gearbox – also gives the Japanese model superior mud-plugging abilities to its front-wheel-drive rival. Will that help it to scramble to the number one spot in this test?

Price: £17,995Model tested: Forester 2.0XChart position: 2WHY: The quirky Subaru is now a proper SUV. It’s more spacious than before, but keeps 4WD and low-range gearbox.

START adding up how much the Forester will cost you to run, and it begins to look like a pricey option. Fuel economy of 27.6mpg wasn’t too bad given our demanding test route, yet it’s the servicing bills many will find unacceptable. Buyers need to budget £845 for three years of maintenance from a Subaru franchise. Some outfits may offer cheaper deals, but keeping the Forester on the road is costly. A lowly retained value of 31.5 per cent after three years for the previous model doesn’t bode well for its successor. Figures for the base Captiva haven’t been released either, but other variants retain up to 53 per cent of their value.