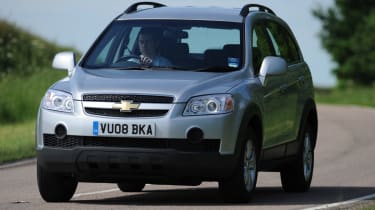 THERE’S a fine line between bargain and budget, and it’s one Chevrolet treads with all of its latest models. As quality improves and the prices remain tempting, are we ready to accept the US badge as a household name in the UK?

If the looks of the Captiva are anything to go by, we should be. It hasn’t got the chunky lines of the Nissan X-Trail or Land Rover Freelander, but it’s a lot more appealing than the Forester. This new entry-level diesel variant gets alloy wheels, smart body cladding and has attractive proportions. There are even twin exhaust pipes to match those of its petrol-powered rival.

The design can also teach its Japanese challenger a thing or two about interior style. The Captiva doesn’t feel as solidly constructed as the Forester, but the layout is far easier on the eye.

While the look is sharp, some of the materials are woeful. Considering the gearlever and steering wheel are the two points of contact for the driver’s hands, the horrible plastics used on them are a big letdown. The controls for the radio and air vents are much better, but the large cover on the centre console looks as if it should be hiding a sat-nav screen, not a cubby. Take a seat in the back of the Captiva, and you get nearly as much space as in the Subaru, with 750mm of legroom and a light and airy feel. While the more costly Captiva LT gets seven seats, the cheaper LS is equipped with five. This limits ultimate versatility, but it does help to make the most of the luggage space.

The 465-litre boot is 80mm longer than the Subaru’s at 1,000mm, and it has several underfloor storage areas. Fold the seats, and not only does the backrest drop, but the squabs automatically hinge into a lower position to leave a flat load floor. In the Subaru, the seat base is fixed in place.

A petrol-powered version of the Captiva is available for £16,995, yet it’s the newly introduced base model diesel that makes more sense. At £18,295, the front-wheel-drive oil-burner is £300 more than the Forester. And it doesn’t take long behind the wheel to see that the diesel is worth every penny.

The 2.0-litre unit offers gutsy performance and reasonable refinement, propellingthe Captiva from 0-60mph in 10.6 seconds, which is identical to the Forester. And in-gear the Chevy pulls ahead, thanks to a torque figure of 320Nm – the Subaru has to make do with 196Nm.

However, with power fed only through the front wheels, pulling away quickly isn’t always easy. In our performance tests, the weighty SUV suffered excessive wheelspin in first gear, which was left uncorrected by traction or stability control – this is only available on more expensive LT variants.

Leaving off this essential safety kit is even more of a problem if you enter a corner too quickly. The Captiva isn’t light on its feet and would rather push on through a bend rather than turn into it, leaving the driver with the task of bringing it back in line.

It’s a practical family carrier , but will the compromised handling cost the Chevrolet victory here?

Price: £18,295Model tested: Captiva 2.0 LS VCDiChart position: 1WHY: Entry-level five-seater Chevrolet is now offered with a 2.0-litre diesel, and costs only £300 more than the Forester.

PRICED at £300 more than the Forester, the Chevrolet is immediately on the back foot... but it shouldn’t take long to make up the difference. It wasn’t as economical as we expected, managing only 30mpg. With diesel now much pricier than petrol, the thirstier Forester will bring similar annual fuel bills. The savings come when you take your Chevy in for a service. A £299 fixed-price package for three years/ 30,000 miles maintenance is great value. The only area where the Captiva loses out is in tax. A 195g/km CO2 output places the Chevrolet in the 30 per cent bracket, making it £138 more costly to tax than the Forester for business users.