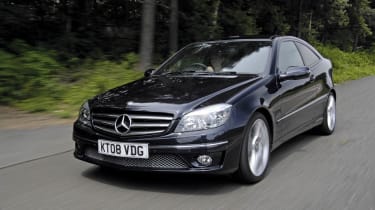 When is an all-new model not fresh from the ground up? When it’s the Mercedes CLC. Despite wearing a new badge, the three-door is a redesigned version of the old C-Class Sports Coupé rather than a true debutant.

Judging by the admiring glances the Mercedes received on our test, that’s not going to harm its showroom appeal. It oozes glamour, especially from the front – which is largely thanks to the new C-Class. The compact exec donated its front end.

From behind, though, the Mercedes is less attractive. One of the most distinctive aspects of the Sports Coupé was its curved lower rear windscreen – a feature adopted by Honda’s current Civic. The CLC replaces the small glass area with a solid panel. Look a little closer and you will find the lines and shapes that made the old car are all still there – panel gaps haven’t been covered up. Not only are the new tail-lights less elegant, the design leaves the driver with appalling rear visibility.

Inside, there is further evidence that this model has been made on the cheap. The dash will be familiar to drivers of the old C-Class, not the latest one. So CLC owners have to put up with some low-rent trim quality.

Our Sport model gets racy additions such as a chequered flag effect on the dials. More impressive in this company, though, is the practicality. While front occupants enjoy a cosseting, sports car feel, passengers in the back have plenty of space: only the A3 matches the 740mm of legroom. The Merc’s boot is also generous, with the large tailgate giving access to a 310-litre capacity. Our car had the £1,050 five-speed auto box, which did nothing for the four-cylinder diesel. The 148bhp engine is the least potent in the group, and the CLC disappointed at the track, managing 0-60mph in 10.3 seconds.

We expected more from the rear-wheel-drive chassis, too. Mercedes claims to have replaced 1,100 parts, yet it didn’t feel much different from the Sports Coupé on the road. While new steering offers more feel, turn into a corner and the CLC pushes wide where the 1-Series tracks neatly around.

What has really let the Merc down is its inability to justify its price. If you want a high-spec diesel, be ready for a big bill. Running costs will also probably be high compared to rivals. We managed little over 30mpg on our tough day of testing, while the automatic box contributes to 179g/km emissions. A 26 per cent company car tax bracket is bad news for business users. Retained values are competitive, while servicing costs undercut the BMW’s.