Class-leading driver appeal in a package that still splits opinion 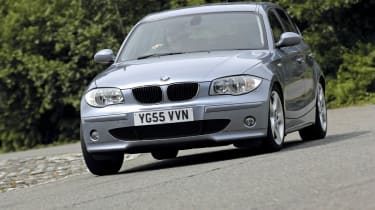 Got a spare half-hour? Ask a passer-by in the street if they like the look of the BMW 1-Series!

To say the car divides opinion is putting it mildly. Some see its unique style as the perfect embodiment of BMW design in an unusual shape. The opposing view is that the model is a travesty of conflicting lines, neither as distinctive as the Volvo C30 nor as well proportioned as the Mercedes CLC.

Whatever your view, BMW has at least tried to bring people round to its way of thinking by offering a variant for all tastes. Three-door hatchback, two-door coupé and convertible bodystyles have joined the five-door that has been available from the start.

The latter is clearly the most practical choice in the range, with its rear doors giving easy access to the cabin. Once you’ve climbed aboard, space in the back is a bit tight, although the boot is 20 litres larger than that of the Mercedes, with a capacity of 330 litres when the seats are in place.

The car in our pictures is the cheaper 120d, yet the powerful 201bhp 123d is a closer match on price to Mercedes’ range-topping diesel. And from the outset, the BMW has its rival on the ropes.

Needless to say, that gives the BMW the edge on the road. At low revs, the smaller of the 123d’s turbos provides the thrust, while the larger one steps in as engine speeds rise to avoid any lag. Real-world acceleration is superb, easily making the BMW the fastest car here. Only the Audi offers comparable pace, and the CLC is left trailing in the wake of a model that feels years ahead in terms of technology and engineering.

One thing the BMW lacks is an engine note to go with its performance. While it’s smooth, there’s never any doubt over what fuel is in the tank. It’s a bit clattery at idle.

That’s soon forgiven on the road. While the BMW’s ride has never been class-leading, its dynamic abilities shine through. Where the Audi feels like a hot hatch, the 123d gives you the sense that you’re in a sports saloon, and is capable of quick changes of direction.

While it’s not cheap to buy, the 123d makes good financial sense. Low 138g/km emissions place our car in the 18 per cent group, so it’s the most tempting company choice. Economy is also strong. Retained value is a bit disappointing – both the C30 and A3 are safer places for your money. Also, although the £900 three-year fixed price servicing keeps costs in check, most rivals in this test won’t be quite as expensive to maintain on standard service schedules.