Hatch has one of the strongest images in this sector. 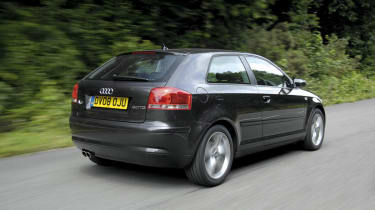 The A3 has always been greater than the sum of its parts. Despite being based on the Volkswagen Golf, feeding power through the front wheels and having a fairly conservative shape, this Audi has long been one of the most desirable cars in its class.

Its visual appeal is all down to perfect proportions. The three-door is smart from every angle – and it’s about to get even better looking. A facelifted version goes on sale next month (see Page 36), with subtle styling tweaks and a minor mechanical makeover.

Inside, the existing version remains a high-quality product. What the Audi needs is some more distinctive lines in the cabin. We have no complaints with the materials, but it’s an incremental step on from the Golf for a substantial climb up in price. On the road, the A3 soon sets itself apart from cheaper rivals. If you are expecting the numb driving experience of your average front-wheel-drive compact family hatch, you will be pleasantly surprised. It has the poise and agility to better most rivals.

While the handling is similar to the Golf’s, Audi has engineered a firmer set-up. That’s not good news for long distances, but gives the A3 a more aggressive edge.

Our car’s 168bhp 2.0-litre diesel also proved to be a superb performer. Despite having less traction off the line than its rear-wheel-drive rivals, the TDI did 0-60mph in 7.9 seconds – that’s 23 per cent quicker than the CLC. In-gear thrust is just as impressive. A 138bhp variant is available, but it demands a big sacrifice in pace for a £930 saving.

Audi says the A3’s key competitor is the BMW 1-Series in all its bodystyles. It also names the Mercedes CLC as a rival, but acknowledges it’s a more costly option – so buyers drawn away from the three-pointed star model are described by marketing chiefs as “descenders”.

A glance at the price list confirms this. Our manual Sport weighs in at £21,250, which is £3,535 less than the flagship diesel CLC. The Mercedes cuts more of a dash, but to give your Audi greater visual appeal, you can opt for S line trim for an extra £1,550. What’s more, the 2.0-litre TDI is now offered with the twin-clutch S tronic transmission and quattro 4WD for an additional £1,400.

The imminent new A3 will also bring a boost in efficiency – but economy is a big strength of the current car. Our 43.9mpg average was achieved over more motorway miles than rivals, yet it’s nonetheless highly impressive. So while it’s the sensible option in the class, the A3 shouldn’t be overlooked.

Price: £21,250Model tested: Audi A3 TDI SportChart position: 2WHY: It’s the car that invented the sector, and A3 is still a great all-round compact exec hatch.

Not only is the A3 2.0 TDI one of the most competitively priced cars, it’s also one of the most cost-effective to run. As with most Audis, the hatch retains more than half of its value after three years. Our servicing quotes were competitive, too. Economy is good: in our hands, the car returned 43.9mpg. And this figure didn’t drop by much even when we pushed the TDI hard on the track. Emissions are strong as well; only the BMW puts out less than the A3’s 151g/km.