Swedish three-door turns heads, but what else does it offer? 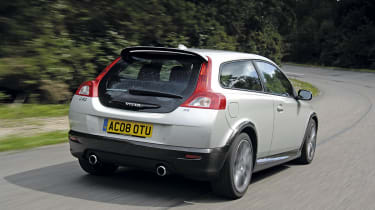 With no previous history in the compact executive hatch class, Volvo designed the C30 from a clean sheet of paper. And designers were clearly allowed to let their hair down!

The car is only conventional from the front, where it’s identical to the S40. It draws inspiration from the past elsewhere, echoing the lines of the 480 ES and P1800.

So is it a success? Our R-Design SE car is the most self-indulgent variant, with its two-tone finish emphasising the unusual lines. In the end, it stands out for being different rather than beautiful.

Inside, the attractive dash blends all Volvo’s cabin expertise with an added dose of style. The familiar floating centre console is still an attractive feature. It looks more modern than the CLC’s cockpit, and has a greater premium feel. What’s more, the rear space is more usable than you’d expect. While clambering into the back is tricky, the two individual seats provide ample head, leg and shoulder room for adults.

If only the load space was as impressive… Lift the all-glass tailgate, and the boot floor is so high, you could be fooled into thinking the C30 is rear-engined! There’s only room for a couple of small bags if you still want some rear visibility, although the seats fold easily to make space for larger luggage.

Buyers of diesel C30s have a choice of four or five-cylinder engines. Our flagship car was powered by the 178bhp 2.4-litre five-cylinder, which pumps out 400Nm of torque at 2,000rpm. Volvo claims it can cover 0-60mph in 7.3 seconds, but in our tests it was nowhere near that. We could only achieve 8.4 seconds, and found in-gear thrust in higher ratios disappointing, too.

The dynamics are equally uninspiring. Much of the C30’s mechanicals are shared with the agile Ford Focus, so it’s a pity the car isn’t as entertaining. Instead, engineers have come up with a comfortable cruiser.

And buyers can relax in the knowledge they have a bargain. In basic petrol form, the C30 is available for only £14,995. The flagship diesel R-Design SE comes well within budget in this group, at £20,770. Even loaded with options, our £23,710 model comfortably undercuts the CLC.

It’s another car that won’t suit everyone, but the C30 makes a strong case for itself.

Price is really on the Volvo’s side: even in flagship diesel form, it’s the cheapest car here. What’s more, buyers lose only £9,970 of that over three years – less than any rival here. Annual fuel bills are higher, though. This C30 is one of Auto Express’s long-term test cars, and in its three months with us so far it’s averaged 37.8mpg. For better efficiency, consider a four-cylinder diesel. The Volvo is cheaper to insure than the BMW and Mercedes in this quartet.