Cheeky Italian backs up its style with substance. 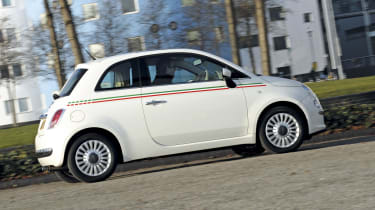 Comfortably the most expensive car in this test, Fiat’s 500 has it all to prove. It faces its rivals here with a string of accolades to its name, yet the premium price means it’s a car that’s difficult to pigeonhole.

However, that’s no concern for anyone who remembers the original 500. Where the other three models in this test look like they have been designed to a price, the Fiat appears to be a lovingly crafted style statement. While some of the details could be criticised for being a little clichéd, the 500 oozes desirability – something that is sorely lacking in the city car class.

Pull on the neat chrome door handles, and you’ll be greeted by a cabin with even more retro features. While our Living Legends test showed that the interior bears little resemblance to the Fifties original, the matt plastic panels and 500 badges make the Fiat feel special.

In comparison, the Renault appears low rent and the VW sombre. Only the Ka comes close in terms of design flair. As with the Ford, the 500 offers ample space in the front. Even the 185-litre boot is surprisingly practical. The Ka’s extra 39 litres are a result of swapping the space saver for a can of foam sealant, but both models are bettered by the 260-litre Fox.

The 500 is powered by the same 68bhp 1.2-litre engine as the Ford. Performance isn’t exactly trail-blazing, but it was the quickest car in this group. Our test car had 8,000 miles on the clock rather than the 300 miles covered by our Ford, and the Fiat took 13.3 seconds to cover the 0-60mph sprint – two-tenths of a second faster than the Ka. However, both models were well ahead of the Renault and VW.

Where the Italian model does lose ground to the Ford is on twisty roads. Without the experienced hand of the blue oval’s chassis experts, the Fiat feels less composed than the Ka. There’s more body roll when cornering, while the rear suspension bounces more than the front, resulting in a pitching effect when tackling bends or braking hard.

Stick to an urban environment, and the 500 is in its element. Its tiny size makes parking in tight spots a breeze, while the light controls are responsive and direct without the need for the gimmicky assistance-boosting City button.

While the cheapest Fiat 500 weighs in at £8,100, our 1.2 Lounge test car is listed at £9,500. The good news is that the Italian model comes with seven airbags as standard – the Ka only has two. Our cost panels on Page 48 show that stronger predicted residual values mean you’ll get more back when you come to sell, yet the price tag is sure to put some buyers off.

However, choose the Fiat, and not only do you get a capable city car, you also own a motor that has desirability as standard.

Fuel and insurance costs are reasonable, too, although the pre-paid servicing deal makes the 500 the most expensive car in our quartet to maintain – it’s much pricier than the Ford.