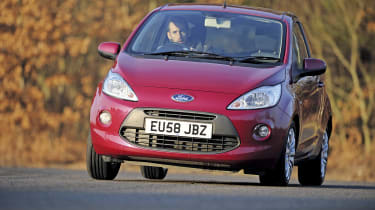 The latest Ford Fiesta is one of the most impressive cars of the last 12 months. Distil the charms of the full-sized supermini into a smaller package, and you should have a winner.

However, the new Ka isn’t as simple as that. Unlike the Fiesta, which was designed from scratch by Ford, the newcomer is essentially a rebodied Fiat 500.

Hold the key in your hand, and you are immediately reminded that this isn’t a Ford at heart – the blipper is a rebadged Fiat unit. Park the Ka next to a 500, and it comes out second best on styling. Designers were given the shape of the 500 and asked to add Ford features – the result being that the Ka looks like a Fiesta that’s been squashed in a vice.

Climb inside, and you can see that all of the switchgear is in the same position as it is in the 500, too. The dash has been reskinned, yet you can’t help but think Ford could have revised the layout further.

So, is there any point in taking a test drive? Yes. The Ka shares a lot with the 500, but that’s no bad thing, as the Fiat is one of the best city cars money can buy. As a result, the Ford has adequate space front and rear, and a healthy 224-litre boot. Where the engineers have put in more work is with the Ka’s mechanicals. The firm has carried out extensive revisions to the chassis to make the newcomer handle as well as the rest of its range.

Jumping into the Ka after the 500 is a strange experience – the controls are in exactly the same place, yet they have a different feel. The Ford offers more direct responses to any input from the driver. Changes of direction come with less body roll, while the steering is more accurate. However, ride quality and driver entertainment are well behind the Fiesta.

The Ford’s 1.2-litre petrol engine is one of the stronger performers here. It delivered brisk acceleration and the best economy, yet it felt breathless on the road. However, our car had only covered 300 miles, so this should improve once the motor has loosened up.

The final ingredient of any city car is price. With a list figure dipping below £6,000, the original Ka became excellent value towards the end of its life. Its replacement is available from £7,827, while our Zetec test car costs a pricey £9,295. However, that’s still £205 less than the Fiat. Will it be enough to secure victory, though?

What will it cost you? The second most expensive car in our line-up – yet only the Renault has weaker residual values than the new Ford. After three years and 30,000 miles, the Ka is expected to retain only 40.6 per cent of its showroom price.

As with its Fiat 500 twin, the Ford emits 119g/km of CO2, so owners will shell out only £35 a year in road tax. Company buyers will be drawn to its low 10 per cent tax rating, too. But strangely, the Ford is the most costly car in our test to insure.

Price: £9,295Model tested: Ford Ka 1.2 ZetecChart position: 2WHY: Replacement for long-lived original Ka is finally here. We see if it lives up to legend.