Most basic version of French runabout has Ka beaten for price. 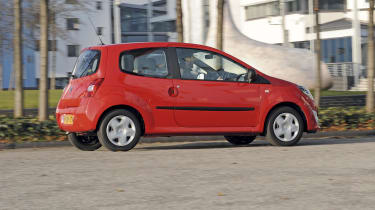 When it comes to building great small cars, few firms can match Renault’s track record. The original Twingo is a case in point. It was innovative and funky, and sold millions in a production run that lasted nearly 15 years. But it was only available in left-hand drive, so British buyers had to wait until the second-generation model arrived last year before they could get behind the wheel.

Sadly, the latest car has failed to live up to the reputation of its predecessor. Uninspiring styling and lacklustre driving dynamics have so far combined to leave the Twingo trailing. Only the range-topping Renaultsport version has made a good impression.

There could be hope for the Renault at the other end of the line-up, though. With a bargain price of £8,122, a versatile cabin and an economical 1.2-litre engine, the Extreme version certainly looks good on paper. But is it enough to finally take the fight to its talented rivals? Visually, the Twingo is a mixed bag. It’s best viewed from the front, where the smooth nose and large headlamps give the Renault a distinctive face. Elsewhere, the slab sides and upright stance make the car look dated, and it certainly can’t match the cheeky flair of the Fiat.

The Renault’s slightly boxy styling pays dividends once you climb aboard. There’s a decent amount of space available, with plenty of room for two adults in the back. While the Extreme lacks the split-fold and sliding rear bench of pricier models, it still has a 230-litre boot, putting it second only to the VW.

Up front, the driver gets a neat steering column-mounted rev counter, while a distinctive binnacle in the centre of the dashboard holds a large digital speedo.

Look closely, though, and it becomes clear that the Twingo has been built down to a price. Cheap plastics are used throughout, and it’s no better equipped than the VW, which undercuts the Renault by nearly £1,000. There’s further disappointment at the test track. With only 59bhp from its 1.2-litre engine, the Renault takes a leisurely 16.1 seconds to get from 0-60mph.

It puts on a stronger performance at mid revs, but the powerplant is harsh when pushed, which discourages you from exploiting the car’s limited acceleration.

Head out on the road, and the French car’s fortunes improve a little. The steering is direct and well weighted, while grip from the skinny tyres is surprisingly strong. However, the ride is too firm, making the Twingo an uncomfortable inner city proposition. Out of town, the combination of wind, road and engine noise makes the Renault a tiring long-distance choice.

At £8,122, the Twingo looks appealing in this company. But probe deeper, and you’ll find a car that’s outclassed and overpriced.

What will it cost you? the Twingo feels like a cheap car, but it’s nothing of the sort. At £8,122, it’s more expensive than the Fox Urban, and if you include the optional air-conditioning fitted to our test model, it will set you back a hefty £8,660. Servicing costs are surprisingly high, while the insurance premiums are fairly average for this class. Where the Twingo really scores, though, is with its economy. Only the Ka could better the Renault’s impressive 39.2mpg in its time with us.

Price: £8,122Model tested: Renault Twingo 1.2 ExtremeChart position: 4WHY: Twingo hasn’t left an impression on this class yet. Can it do so in base form?