With its folding metal roof, French star is unique in this company 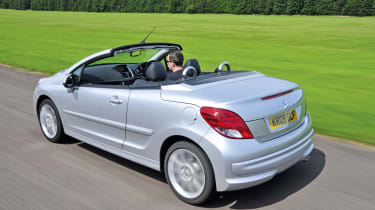 The standard 207 supermini isn’t as fashionable as the MINI and 500, but in folding hard-top CC guise, the model’s coupé-like dimensions mean it has plenty of style.

And ever since its predecessor the 206 CC introduced the idea of an affordable coupé-cabriolet, Peugeot has had a major sales success on its hands. While Pininfarina penned the old model, the design of the 207 CC was brought in house, although there are plenty of obvious similarities.

For starters, both cars have a roof made of two parts – and this has an unwelcome impact on the packaging. It means the windscreen has to extend a long way over the cabin, and this compromises headroom and causes nasty blind spots.

The driving position isn’t as comfortable as in the MINI, but you do at least sit lower than in the Fiat. As with other 207s, the upper part of the dashboard is modern and attractively designed. However, the plastics used lower down in the cabin look and feel cheap. There are further niggles in the back. Crucially, unlike its rivals in this test, the 207 isn’t a genuine four-seater. The rear seats are so upright and tight for legroom that even children struggle to fit i

What’s more, with the metal lid stowed, the boot space is shallow and difficult to access. On the other hand, its 187-litre capacity is still 62 litres ahead of the MINI, while with the roof up, the room available expands to 449 litres.

As with both its rivals, the Peugeot’s roof is fully electric, but its more complex folding action means it that takes longer to raise or drop. Of far greater concern, though, is the movement to be felt around the A-pillars with the roof down. The Peugeot doesn’t resist body shake as well as the MINI.

This also highlights the fact that the ride on rough roads isn’t great. Bumps and imperfections can be felt through the steering and the suspension. The chassis, however, is a mixed bag. While it lacks the rigidity to be totally composed, a sharp turn-in and reasonably agile handling mean there’s fun to be had.

Unfortunately, the flimsy and slack five-speed manual gearbox takes the edge off the driving experience, and the brakes lack the firm bite that makes the MINI so reassuring. Our 148bhp turbocharged model was quicker than its rivals here, but the normally aspirated 1.6-litre VTi – which was not available to test – is closer on performance and price.

Whichever engine you choose, the 207 is heavier than its fabric-roofed challengers due to its metal top. However, this is the car’s unique selling point, giving it a dual coupé-cabrio personality that is irresistible to some. But will the resulting compromises of reduced practicality and rigidity hold it back here?