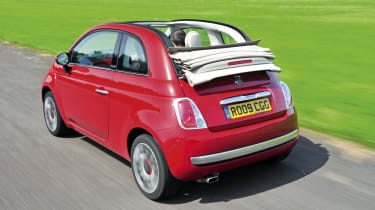 You have to hand it to Fiat. The 500 is now on sale in 59 countries and 360,000 have already found homes, so it has reinvented the style icon status of the original all over again. And now, the Italian firm is hoping to repeat this success in the small cabriolet market.

Back in 1957, the original 500 drop-top offered wind-in-the-hair motoring at an affordable price, thanks to its simple roll-back canvas roof. And Fiat has followed the same format for its modern recreation.

At first glance, with its fabric hood in place, you’d be forgiven for mistaking the newcomer for its hatch brother. Fold the roof, however, and the canvas concertinas back to sit above the bootlid – although this obscures rear visibility and looks scruffy.

The good news, though, is that standard parking sensors in Lounge trim aid reversing. And on all models, you have the choice of folding the hood back to just above the rear passengers’ heads. This intermediate position leaves the small rear glass screen in place. But either way, the fixed roof pillars mean the 500 doesn’t look or have the feel of a ‘real’ convertible.

There are advantages to this set-up, though. For starters, it means the 500 has the most legroom of this trio, while split folding rear seats help practicality. Plus, the boot is only three litres smaller than that of the hard-top, at 295 litres, and luggage space doesn’t change when you drop the roof.

The hood can also be opened and closed on the move, at speeds up to 37mph. As it’s fully electric, the system is simple to operate from the driver’s seat. Like other 500s, you sit quite high, although thanks to the side pillars, and a fairly upright windscreen, buffeting isn’t a big issue.

Plastics lower down in the cabin can’t match the MINI for quality, but the familiar retro-inspired dash still has real charm. Its logical layout is also easy to live with. Light steering and a well placed gearlever mean the Fiat is effortless to drive, although the controls lack the precision of the MINI. And while the 500’s Panda-based chassis delivers composed handling, it can’t match the agility and constant stream of feedback that make its British rival so entertaining.

Crucially, the 500C doesn’t suffer from body twist – no doubt helped by the fact it has lost only the top section of its roof. Some shake can be felt around the windscreen pillars and through the steering, but it’s more rigid than the Peugeot.

This boosts the ride quality, too, and the 500 is the most comfortable car of the trio. At motorway speeds, sound is well isolated from the cabin, and only minimal wind noise around the top of the windscreen reminds you that this isn’t a conventional Fiat 500.As you would expect from a cabriolet based on an affordable city car, the little Italian is also the cheapest of our trio.

And despite having a smaller power output than the MINI, its low weight means it feels quick enough through the gears.

The 1.4-litre unit is a bit strained higher in the revs, but unlike in the 207 CC, a six-speed transmission is standard.

Add strong safety equipment and generous kit, and the Fiat newcomer could be a big summer hit.

Chart position: 2WHY: Drop-top version of Fiat city car is sure to be popular in convertible-loving Britain.