Well thought out revisions make cabrio more desirable than ever 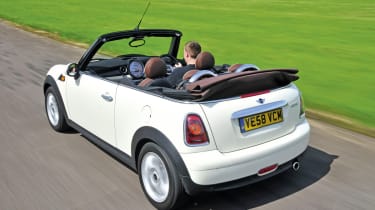 Unlike the 500, the Fifties Mini didn’t have a strong drop-top tradition. But that didn’t stop BMW from lifting the lid of its British legend when it relaunched the marque in 2001.

Now, the second-generation model hopes to continue the success story – the new cabrio gets the same styling upgrades and interior improvements as the hatch and Clubman.

However, MINI has made some specific amendments to the design of the Convertible. Firstly, the rear protection hoops are lower – they now pop up in the event of a potential rollover – while the hood stacks in a neater fashion on the back. This not only looks better, but it aids rear visibility. The ungainly tailgate latches of the previous model have also been removed.

Inside, the driving position is near perfect, while the materials and build quality are first-class. The roof is well insulated and nicely trimmed, too. Plus, as with the old car, it’s fully electric and can be opened to an intermediate position, similar to a large sunroof, or folded completely. With frameless doors and no roof pillars, the MINI is far more of a ‘genuine’ cabriolet than the Fiat.

There is a price to pay for this, though. Rear passenger space is limited, the back seats are upright and the 125-litre boot is tiny – although you can fold the seats flat to boost practicality, unlike in the Peugeot.

But, most importantly, removing the roof hasn’t affected the MINI driving experience. The newcomer is even tauter than its predecessor. There’s a bit of shake through the steering and windscreen surrounds over really rough surfaces, yet it’s clear MINI has done an excellent job with under-body strengthening.

The Convertible has the same sharp steering, strong body control and precise handling as its hatch brother, and, as a result, it’s the most engaging of our trio on a twisty road. With perfectly weighted controls, a smooth stop-start system and a firm, but not crashy, ride, it’s great in town, too. The 1.6-litre engine is the same base unit as found in the Peugeot – it’s keen to rev and feels less strained than the Fiat under hard load. The Cooper is 35kg heavier than the 500C, but delivers an extra 18bhp, so it was three-tenths quicker from 0-60mph, with a time of 10.4 seconds. But despite a 29Nm torque advantage, the weight begins to tell, as the 500C recorded quicker 30-50mph in-gear times.

Overall, performance is pretty closely matched, but the MINI is more enjoyable to drive. However, you’ll have to dig deep for these wind-in-the-hair thrills.

Has the Cooper done enough to justify its higher price?

Chart position: 1WHY: British firm has finally brought cabrio in line with rest of second-generation line-up.