It’s an estate’s biggest selling point – so which car is the ace of space? 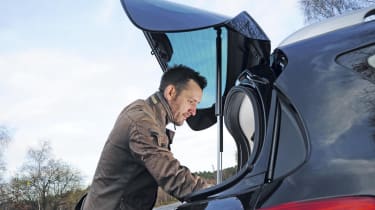 Check out the data tables and you’ll see that the Peugeot has the biggest boot – with the seats folded, it will swallow an impressive 2,149 litres of luggage. But there are other reasons the 308 SW is a favourite family carrier.

A split tailgate allows the glass section to be lifted independently for small items, while the main hatch has the tallest opening of the group, making it perfect for moving large loads.

Versatility is further boosted by the option of an extra pair of seats. However, they don’t fold fully flat, so you have to remove them to maximise boot space. Taking them out is simple, although the suitcase-sized chairs are quite heavy and you wouldn’t want to move them too far.

Nevertheless, the middle row of seats slides, giving more luggage capacity or legroom as you need it. While the Peugeot has the biggest boot of our test cars, it’s the Renault that features the widest load area – with an extra 100mm between the wheelarches. As with its rivals, the Mégane’s bay is packed with useful cubbies, hooks and dividers. In the cabin, you’ll even find decent underfloor storage in the front footwells.

Yet the fittings don’t feel sturdy, and the boot-mounted load divider is unnecessarily complicated to use. The rear bench also seems flimsy when being folded. The squabs can be removed completely, which allows the backrests to sit perfectly flat – although you then need to store the bases somewhere when they are not in use.

While some parts feel cheap, the Renault does boast a folding front passenger seat, allowing you to use the whole length of the interior. The Skoda doesn’t have as many clever tricks up its sleeve, but it does feature a roomy interior and the longest boot with the seats in place. It has a low loading lip, too, meaning heavy items can be slid into the boot with ease. There’s also a large underfloor storage area, bag hooks, 12-volt socket and ski hatch.

Fold the rear bench flat and you’ll find a well trimmed, 1,620-litre boot. The Skoda also has the most robust load cover of the group. As with the front of the cabin, the business end of the Golf estate is particularly nicely finished and sturdy.

In isolation, its carrying capacity of 1,495 litres seems impressive, but it can’t match the larger volumes delivered by its rivals. The same is true of the rear seats, because the German car offers the least amount of space in the back of the models on test. On the plus side, the tailgate lifts to reveal a wide opening and low lip. The VW has all the equipment you would expect from a load carrier, including an auxiliary power socket, a ski hatch, covered side compartments and bag hooks. But this isn’t enough for it to take the spoils in the practicality stakes.

Ratings 308 SW 5/5 The Peugeot is the most versatile car here. It offers seven seats, a split-opening glass tailgate, picnic tables and the largest load space of our contenders. However, that extra row of seats reduces capacity, and the fittings feel cheap.

Megane 5/5 With a wide boot, folding passenger seat and plenty of stowage options, the Renault is the finest load carrier. Rear legroom is good, too, but build quality isn’t up there with that of the Skoda or Volkswagen.

Octavia 4/5 while the Skoda doesn’t stand out in any particular area, it’s a strong all-round choice. A large luggage space, decent rear room and a pleasingly trimmed boot give good versatility. Plus, there’s a low load lip, lots of storage solutions and the seats fold easily.

Golf 4/5 If you’re looking for the best finished luggage area, the Golf leads the way in this group. However, even the diverse array of storage solutions doesn’t hide the fact that it can’t match the load capacity of its rivals.