Versatility doesn’t have to come at the expense of good looks. 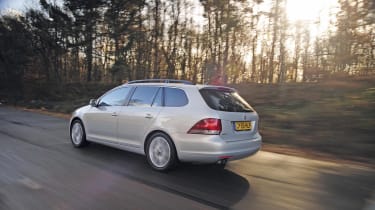 Practicality is at the top of the shopping list for most family car buyers, yet that doesn’t mean style should take a back seat when choosing a compact estate model.

All four of our contenders have a very different approach to design, but the most visually exciting is the Mégane. The French manufacturer has a strong reputation for turning out distinctive styling – and the Sport Tourer upholds this.

The tapering window line, sloping roof, steeply raked rear end and wraparound tail-lights give the Renault a sleek and sporty appearance which helps it stand out from the crowd.

Look closer and you’ll spot neat details including the silver roof rails and chunky rubbing strips on the bottom of the doors. Our test car also benefited from optional 17-inch alloy wheels, which look great and are well worth the £300 upgrade cost. The only visual disappointment is the bland nose, which is shared with the standard hatchback model.

At a glance, the new Golf appears pretty much unchanged from the previous version. The front gets the same swept-back lamps and black grille as the latest MkVI, but the rest of the exterior is carried over from the old car.

While the Golf won’t turn quite as many heads as the rakish Renault Mégane, its elegant proportions, classy image and solid build help give strong kerbside appeal.

Our Sportline trim test car received a further visual boost thanks to its standard 17-inch alloy wheels, black-finish roof rails and neat twin-exit tailpipe. If you like the upright estate car look, the Skoda will impress. Although the design is even more conservative than the Golf’s, a facelift earlier this year did help to freshen up the load-carrying Octavia’s lines.

New headlamps, borrowed from the Superb, and a revised chrome grille are the biggest changes but, as with the VW, the rest of the exterior is near-identical to its predecessor’s. Even the multispoke alloys of our top-spec Laurin & Klement version fail to give the Skoda any real visual impact.

On the plus side, the superb build quality means the Octavia virtually rivals the Golf for premium appeal, while its boxy exterior translates into a versatile interior.

You certainly won’t struggle to attract attention aboard the Peugeot, as its design is the most distinctive of the group. The car in our pictures is a Sport model, but visually it’s very similar to the flagship SE. However, the mix of flowing curves, sharp lines and bold detailing means it appears a little ungainly here.

The third row of seats in the boot requires extra headroom, which makes the rear seem bulky. Add to that a clumsy-looking, gaping grille and fussy character lines in the flanks, and the 308 SW can’t compete with its rivals when it comes to style.

Ratings Megane 5/5 In this company, the Mégane is by far the most rakish and visually interesting choice. While it can’t match the premium image of the Golf, there’s plenty of flair in the design. Our model’s 17-inch alloys are a £300 optional extra. Golf 4/5 Latest Golf is almost too understated – the change from the MkV has been more evolutionary than revolutionary. Still, it’s well proportioned and has some classy detailing. Sportline trim adds alloy wheels and stiffer suspension. Octavia 3/5 The recent revisions haven’t exactly transformed the Skoda’s upright appearance. As with the Golf, though, the Octavia’s lines are well proportioned, and it looks elegant and understated in Laurin & Klement trim. 308 SW 3/5 A mix of curves plus sharp lines and detailing don’t sit well together on the SW. The need for additional headroom has created a bulbous shape which looks clumsy next to competitors. Some buyers will also be put off by the gaping grille.