Strong eco credentials are key on any estate as family buyers strive to keep their costs down. 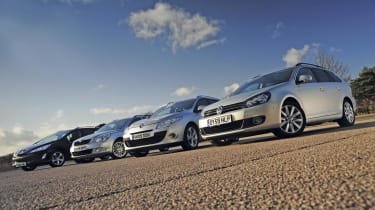 There’s no two ways about it – having a family is expensive. With more mouths to feed, child paraphernalia to buy and plenty of travelling to see relatives, it’s important that the family car is as economical as possible, in order to save some cash at the fuel pumps.

Boasting efficient diesel units, our test models aim to travel further on one tank than their petrol counterparts. But they also need to have low emissions to keep tax bills to a minimum.

All these considerations make the Golf a very good choice. With a modern common-rail motor that fires the exact amount of fuel needed into the cylinders, the Volkswagen uses the least amount of diesel here. Official figures suggest it will hit more than 56mpg combined, and while we couldn’t match this, it still returned the best on test, at 44.2mpg.

Although the Golf has the joint-smallest tank at 55 litres, that extra economy means it will manage 535 miles between fill-ups. Its CO2 emissions are similarly impressive, with the punchy diesel putting out 132g/km – the lowest of all our models. This means the car sits in road tax Band E, so a year’s disc costs £120.

With average economy of 42.3mpg over the course of our test, the Mégane Sport Tourer is nearly as impressive as the Golf, although this figure is still 13mpg short of Renault’s official combined claim. However, as the fuel tank is five litres larger than the slightly more economical VW’s, the Mégane will manage 558 miles between visits to the filling station pumps.

Its CO2 emissions are only 2g/km worse than the Golf’s, so the Sport Tourer sits in the same tax bracket, meaning a £120 a year disc.

Skoda claims fuel economy of 51.4mpg, so we expected the Octavia to be the most frugal car. However, during its time with us, the luxurious load carrier managed only 35.3mpg – the worst in our group. The fact the older engine relishes being worked hard will have contributed to this figure.

That outdated technology also has an effect on emissions. The Octavia produces 145g/km of CO2 – that’s 13g/km more than its VW stablemate. The higher output means it will cost £5 more to tax than the Mégane or Golf.

Although the 2.0-litre diesel in the 308 SW managed better fuel economy than the Skoda, the HDi powerplant emitted the most CO2 on test. An output of 155g/km puts the Peugeot in band G, so owners will have to fork out £150 for a year’s road tax – that’s £30 more than for the Renault or VW.

Fuel economy of 36.4mpg doesn’t seem great, especially compared with the super-efficient Golf. But the Peugeot has a 60-litre tank, and so will cover an impressive 480 miles on a single fill-up.

While the 308 makes a valiant effort, its engine is the least efficient here, despite the recent update. However, when considering its eco credentials, you should bear in mind that the Peugeot is capable of carrying up to seven people.

For real green kudos, though, buyers should look to specific eco-friendly models – such as the BlueMotion Golf.

Ratings Golf 5/5 Modern diesel in the VW is the most efficient here. It returned 44.2mpg in our hands – 8.9mpg more than the dated TDI in the Skoda. The unit’s low emissions also mean road tax works out at £120 annually.

Megane 4/5 It can’t quite match the frugal Golf, but the Renault still managed an impressive 42.3mpg. A larger 60-litre tank means it can go 23 miles further on one fill-up. Plus, 134g/km emissions translate into £120-a-year road tax. Octavia 4/5 The Octavia’s engine is the punchiest, but you pay the price at the pumps. In our hands, it returned 35.3mpg – the worst here. Emissions aren’t as disappointing, so the Skoda costs £125 a year to tax – only £5 more than the Mégane and Golf. 308 sw 3/5 As it emits the most CO2 in our test quartet – at 155g/km – the Peugeot has the biggest tax bill. Owners will pay £150 a year. Fuel economy also let it down, with the SW managing only 36.4mpg over the course of our test.