Quality and durability are key for any family car’s cabin 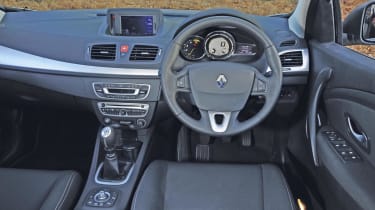 He cabins of these cars will have to stand up to some serious abuse, whether it’s moving bulky items, transporting sticky-fingered children or simply dealing with the daily commute. That means the interior will need to be well laid out and hard wearing, and have a raft of storage solutions.

Buyers certainly won’t be disappointed by the quality on offer inside the Golf. The attractively styled dashboard has been lifted straight out of the hatchback version, while the materials all look and feel classy. Well weighted switchgear and a chunky leather steering wheel complete the premium ambience.

Finding the perfect driving position is easy thanks to a wide range of seat adjustment, the heavily cowled dials look great and are easy to read, and the large door bins will hold plenty of items. Passengers in the back get decent legroom and separate air vents for greater comfort. Our test car came with optional leather trim, which looks superb and is easy to keep clean – although it costs an eye-watering £1,730.

The Skoda is slightly more spacious, even though it shares the latest-generation Golf’s underpinnings. Occupants in the rear get bags of head and legroom, while there’s also plenty of cubby space.

Up front, you’ll find the dashboard benefits from soft-touch plastics and chunky switchgear. As you’d expect, equipment is impressive, with heated leather seats, cruise control and a CD changer all fitted as standard. Only the electrically powered driver’s seat is an issue – it’s easy to adjust, but some owners will find it doesn’t sit low enough.

As with its exterior, the Renault has the most eye-catching cabin. The design is bang up to date, boasting a curving dashboard and light-coloured materials.

Overall, it’s logically laid out and features plenty of standard kit, including keyless entry. The built-in TomTom satellite-navigation system is intuitive to use, too.

However, the dash isn’t perfect. The digital speedo looks garish, the radio is fiddly to operate and the cruise control buttons on the steering wheel don’t illuminate at night. Plus, while the plastics are solid, the interior isn’t as well built as the Golf’s. Although the Peugeot can’t match its rivals for premium feel, its interior does have a unique feature: a seven-seat layout. This third row is a £495 optional extra, and while it’s a little cramped for adults, it’s ideal for children.

The bench doesn’t fold totally flat, which ultimately compromises load space. And while the chairs can be removed, this means you have to find somewhere to store them. Passengers in the middle row of the SW get much more room, while the standard-fit panoramic glass sunroof helps to create a bright and airy feel.

Sadly, the Peugeot is let down by the quality of its fixtures and fittings. The plastics seem cheap and the switchgear feels fragile. Elsewhere, although the pop-up screen for the optional sat-nav looks good, the system itself is difficult to operate.

The final blow to the 308’s hopes is its awkward driving position, which feels higher and more upright than that of rivals. It’s an admirable effort by the French company, but it is clear the 308 SW lags behind its rivals for style and quality.

Ratings Golf 5/5 AS it shares the same dashboard and interior as its hatchback brother, the Golf feels really special inside. Everything works beautifully, there’s plenty of storage and the cabin is refined on long journeys.

Octavia 4/5 The Skoda doesn’t have the most modern-looking dashboard, but it’s logically laid out and solidly built. The cabin is the largest here, too, especially for rear passengers. Top-spec Laurin & Klement model gets lots of standard kit. Megane 4/5 While the upper dash looks and feels classy, the Renault’s controls seem flimsier than the VW’s. Details such as the digital dials won’t be to everyone’s tastes, yet there’s plenty of standard equipment and a decent driving position.

308 SW 3/5 Although the Peugeot’s cabin looks attractive, it doesn’t have the quality to back up its style. Equipment is generous, however, plus it offers a decent amount of space – and the seven-seater layout boosts versatility.