Does new hot hatch move the game on from big-selling original? 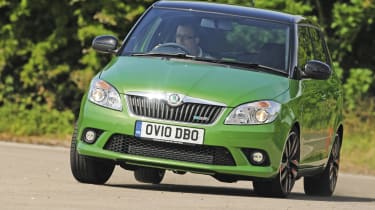 Motorsport heritage can add credibility and kudos to a maker’s showroom range. But competition success is wasted if your roadgoing cars disappoint. That wasn’t a problem with the original Fabia vRS, which had plenty of fans.

It was a founding member of the diesel hot hatch club, with its 130bhp 1.9-litre TDI engine. This gave it a unique selling point in the supermini sector, while its understated styling hinted at the relaxed nature of a car that blended punchy performance with excellent fuel economy. So, some people will be disappointed that Skoda has abandoned oil-burning power for its latest offering. They may also be unconvinced by its styling...

The second-generation Fabia’s tall and narrow stance isn’t the perfect basis for a hot hatch, and the vRS isn’t going to win any catwalk contests.

Even though it wears 17-inch wheels, a small rear wing and deeper front bumper than the regular model, its proportions still look pinched – especially next to the breathtaking rally car, which is all flared wheelarches and big spoilers. Still, there’s scope for personalisation – buyers can choose from four wheel colours, and specify a black or white roof.

Inside, subtle vRS badges complement the solid but somewhat uninspiring cabin. Comfortable sports seats and an attractive leather-trimmed wheel are the highlights. The driving position is decent and there’s also lots of useful stowage around the cabin. You can’t miss the rock-solid build quality, either. So, while the vRS’s interior lacks excitement, it is very easy to live with.

From behind the wheel, it’s a similar story. Anyone coming to the Fabia from a hard-edged rival, such as the Renaultsport Clio 200, will find the Fabia is not built in the same vein.

It lacks the razor-sharp responses, taut body control and communicative steering of the best hot hatches. But grip is consistent and the vRS has a very grown-up feel. It rides well enough for a performance car and has decent brakes. An electronic front differential maintains traction, too, so it puts down its power with little fuss. It’s just a shame its chassis doesn’t have more sparkle.

There’s lots of clever stuff going on under the bonnet, though. As with the Volkswagen Polo GTI and SEAT Ibiza Cupra, the vRS uses the VW Group’s twin-charged 1.4-litre TSI engine. It generates 178bhp and 250Nm of torque, with the supercharger working low in the range before the turbo takes over and boosts the engine at higher revs. Power delivery is linear as a result, and the vRS feels responsive and fast throughout the rev range. Add the twin-clutch DSG box’s smooth shifts, and the end result is relaxed and effortless performance.

Even so, on the test track the Skoda completed the sprint from 0-60mph in 6.9 seconds, while punchy in-gear response means real-world overtaking ability is excellent. The slick transmission adds to its grown-up persona. While purists will feel let down that there’s no manual option, the steering wheel paddles provide control of the gearbox, and the ability to drive in full auto mode makes the hot hatch relaxing around town.

In vRS trim, the Fabia doesn’t have the incredible agility or raw power of its rally cousin. But its punchy performance, efficient engine and twin-clutch box provide an attractive balance between fun and everyday usability. And for an extra £795, there’s a practical estate version.

WHY: New vRS has a great deal to offer, in the shape of an efficient small-capacity 1.4-litre super-turbo engine and seven-speed twin-clutch transmission.