Is the oldest car in its class still a contender? 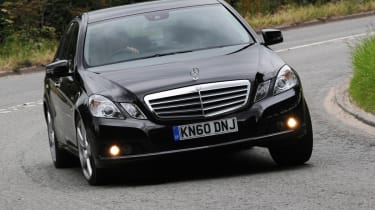 6
Famed for being solid and dependable, the E-Class has, like the 5 Series, been battling for executive saloon honours for decades.
But in recent years, the Mercedes has seen relative newcomers such as the A6 invade its territory as the most comfortable and high-quality offering in the sector. To make matters worse, the current version is now the oldest model in this test. And in the image-driven world of premium saloons, that puts it on the back foot.
The Mercedes was never the sharpest-looking choice, but it appears dated next to the sleek Jaguar, neat Audi and distinctive BMW. Inside, it’s a similar story. The cabin is solidly put together and logically laid out, but the design has neither the character of the XF nor the material quality of the 5 Series or A6. The angular dash has too many dull plastics and the steering wheel is too big.
All is not lost, though. The COMAND control system is intuitive to use and SE models come with heated seats and rear parking sensors as standard.
Under the bonnet, the E220 CDI features a 2.1-litre diesel. It’s gruff at idle compared to the other cars here, but smoothes out to boost cruising refinement. The 168bhp unit has the least power, but offers 400Nm of torque.
At the track, it was the slowest car from 0-60mph, with a time of 9.4 seconds. In-gear pace is more than adequate, though, and the Mercedes is easily able to keep up with rivals in a straight line. Only in corners does a gap emerge, as the handling balance adds to the perception that the car is the old-timer here. It lacks the body control and agility of its rivals and is slow to respond to steering inputs. Up the pace, and there’s also too much kickback through the rim over rutted surfaces.
The set-up is biased towards comfort, and the SE has a supple ride on smooth tarmac. But over broken surfaces, it doesn’t cope as well – so you don’t get the sense of effortless performance and composure you expect.
Add the dull looks and dated cabin, and the E220 CDI misses out on the wow factor needed in this super-competitive class.
It’s not all bad news, as the E-Class remains a practical choice. The boot has a 540-litre capacity – although folding rear seats cost extra – and passenger comfort is on par with the newer cars here.
Plus, buyers can choose from a raft of hi-tech optional kit. Better still, to celebrate 125 years of car building, Mercedes is offering a special Edition 125 SE model. It costs the same as this car, and gets sat-nav and the COMAND multimedia system as standard. Trouble is, it’s too little too late
in the battle for class honours.

Chart position: 4WHY: The elder statesman of the executive saloon car sector still wears one of the most desirable badges in the motoring world. Can the three-pointed star trump the leaping cat?