Established star will take some beating 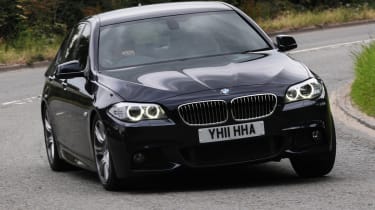 6
Staying ahead of your executive rivals for nearly 40 years would be a hard task for even the toughest businessmen. But in the competitive world of premium saloons, that’s exactly what the 5 Series has been doing.
Since its launch in 1972, the BMW has been a near-constant presence at the front of the class. It lost its crown to the Audi A6 earlier this year, but the margin of victory was narrow – so the 5 Series has a point to prove. While our testers agreed the Jaguar leads the way for style, we couldn’t separate the smart BMW from the more subdued Audi for kerb appeal.
The car in our pictures is the more expensive M Sport variant, which has an aggressive bodykit and larger 18-inch alloys than the lesser SE version tested, and we prefer the less showy look of the cheaper model. Inside, the design borrows heavily from the 7 Series limo, and feels truly luxurious. The sweeping dash, large central screen and first-rate switchgear combine with superb material quality, so the cabin is hard to fault. The driving position is perfect and the ergonomically sound layout puts you right at the centre of the action.
Not that passengers are ignored, as there’s plenty of space in the back. Plus, while the 540-litre boot is the smallest in this test, it trails the class leaders by only 20 litres.
Under the bonnet, the silky-smooth 2.0-litre diesel engine delivers 380Nm of torque, which puts it on a par with the Audi. The Jaguar is the only car to trump the 520d’s 181bhp power output – so predictably, at the test track, the XF beat the BMW’s 8.1-second 0-60mph sprint time. But in the higher gears, the German car’s longer ratios are clearly aimed at optimising economy rather than outright pace, so it trails its rivals against the clock.
Mind you, it never feels outpaced and the rewards are obvious, with the lowest CO2 output here, at only 125g/km.
Critically, these green credentials don’t come at the expense of driver appeal. The communicative steering and precise chassis are accompanied by impressive agility. Its rear-wheel-drive configuration and talented underpinnings make the BMW the most enjoyable car to drive in this test.
The trade-off for this is the firm ride at low speeds, although SE models are less compromised here as they have smaller wheels and more forgiving suspension than M Sport versions.
Our test car didn’t feature BMW’s very latest eco tweaks, so owners should be able to improve on the impressive 37.4mpg we returned on test. And although buyers pay extra for sat-nav – it’s standard on the Audi – you do get heated front seats. So there really is amazingly little between the 5 Series and A6.

Chart position: 2WHY: A former class champion, and still the dynamic benchmark in this sector. The 520d is cleaner than ever, and is also the cheapest choice in our prestige four-door line-up.