Our class leader will fight hard to keep its crown 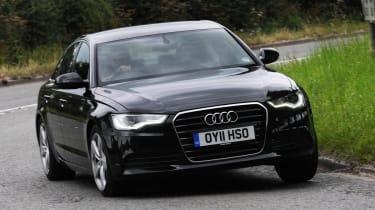 6
The Audi A6 arrives in this test with a swagger. A few weeks ago, we named it Best Executive Car at our New Car Awards, so it’s odds-on favourite.
Revisions to the BMW and Jaguar threaten to undermine the model’s superiority, though – so does it have what it takes to retain top spot? On the outside it’s no match for the sleek XF. The familiar Audi look serves it well, but our dark metallic test car is as unobtrusive as the Jaguar is eye-catching.
The A6 is all about understated class, though, and nowhere is this more obvious than inside. Climb aboard, and you could mistake the surroundings for a luxury model. The simplicity of its controls, quality of its materials and standard of fit and finish mark the Audi out as special – even in this company.
Better still, it’s incredibly spacious and well appointed. It’s the only car here to get sat-nav as standard across the range, and the high-quality display glides out from the dash in the same way as in the company’s more expensive models. The range of seat and wheel adjustment is also worth noting; few cars provide such broad scope for movement.
Start the ignition, and the MMI control system springs into life. It makes the Jag’s touchscreen feel slow-witted, and is easier to use than the latest BMW iDrive and Mercedes COMAND set-ups.
Under the bonnet is a 175bhp four-cylinder diesel. It produces 380Nm of torque – the same as the BMW – and combines with a light six-speed manual shift to provide lively pace. The Audi weighs only 1,575kg; that’s 140kg less than the 520d. Look at our performance figures, and you’ll wonder where this advantage has gone, as the A6 covered 0-60mph seven-tenths more slowly, in 8.8 seconds. Only the Mercedes took longer.
Cast your eye through our data bank, and the benefits of this lighter construction are clear. The front-drive layout is to blame for the Audi’s tardiness off the line, as it was quicker than the 5 Series and E-Class in-gear. It raced from 50-70mph in sixth in 8.8 seconds – two seconds up on the BMW.
Plus, the latest A6 is the most dynamically accomplished yet. Turn into a fast bend, and the front tyres generate huge grip, inspiring real confidence. Lift off the throttle mid-bend, and the nose neatly tightens its line.
Its inert steering still doesn’t provide the BMW’s engagement, but the Audi is swift and enjoyable to drive. Its chassis also strikes the best balance between comfort and composure in this line-up.
Whether you’re in town or on a twisty B-road, the suspension copes with rough surfaces more effectively than its competitors, and our test model also returned an impressive 39.3mpg. So you wouldn’t bet against an Audi win.

Chart position: 1WHY: Earlier this month, the new A6 was crowned Best Executive Car at our New Car Awards 2011. Will its reign be short-lived? Or does it still have the edge over its rivals?