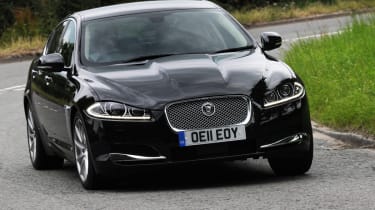 6
British giant Jaguar is surfing a wave of profits at the moment – and it’s all thanks to the success of models like the XF. When it debuted in 2008, the sleek saloon was crowned our Car of the Year. But time doesn’t stand still in the executive sector.
The four-door has slipped down the class pecking order lately, as a succession of cleaner and more affordable rivals has seized its crown. That’s where the new 2.2-litre diesel model comes in. It aims to compete with entry-level German contenders by providing lower emissions and more attractive pricing than ever.
Video: watch CarBuyer's video review of the Jaguar XF
[[{"type":"media","view_mode":"content_narrow","fid":"68287","attributes":{"alt":"","class":"media-image"}}]]
The XF has never been beaten for kerb appeal, and the latest revisions ensure it’s still the class of the field. The new-look nose features smart headlamps and a reworked grille. It takes its cues from the XJ luxury saloon and, judging by the reaction of passers-by to our test car, is an unqualified success.
A string of LED daytime running lamps arcs around the lower edge of the headlights to draw lots of attention to the car. At the back, the diesel is marked out by subtly revised tail-lamp clusters and a single exhaust pipe.
The cosmetic changes run more than skin deep, as the cabin has had a makeover, too. Switches on the centre console, previously finished in hard plastic, are now rubberised, and the glovebox opens at the press of a button, rather than the swipe of a finger over an unreliable touchpoint. These are welcome upgrades, while the usual mix of leather, wood and metal gives the XF an unmistakable Jaguar quality.
Despite all this, the old flaws remain. The car isn’t as spacious as its rivals and its central control system – which relies on a fiddly touchscreen – is neither as user-friendly nor as attractive as those in the other models. The pair of dials ahead of the driver are also small, and the dated digital read-out between them isn’t as versatile or informative as those you’ll find in its competitors.
Can the revised Jaguar make up for these weaknesses on the road? With the promise of a new diesel and automatic gearbox, the signs are encouraging.
Buyers have to pay a premium for this technology, though, as the British car is unique in this line-up in offering no manual option. As a result, the SE model costs £805 more than its closest competitor.
Automatic gearboxes usually come with further compromises in terms of efficiency, but the Jag’s eight-speed ZF unit is designed to be just as green as a manual. And it even features stop-start. On the move, the system works well, shifting quickly and smoothly between ratios.
The four-cylinder diesel isn’t as smooth as its smaller-capacity rivals, but it serves up 187bhp and 450Nm of torque, making it the most potent engine on show.
Against the clock, the XF impressed. It sprinted from 0-60mph in 7.9 seconds – which means it’s the fastest model on test. Lively in-gear responses also make the Jaguar a swift companion, but when you take control of the box using the steering wheel-mounted paddles, it’s all too easy to lose track of which ratio is selected.
Likewise, the auto box can hesitate to shift down when you give the throttle a heavy prod as it works out just how many gears it needs to kick down. On other occasions, it can drop a ratio when all you really wanted to do is use the torque reserves of the engine to pull you along.
Comfort is top notch, thanks to the standard 17-inch alloys. It’s tempting to specify a set of more attractive, larger rims, but we think the cosmetic rewards demand too high a price – as the ride comfort deteriorates on coarse surfaces.
On twisty roads, the Jaguar is sure to put a smile on your face, but it’s not the most polished performer. The softer suspension permits too much body roll in corners, and the steering is too light to inspire real confidence. While it’s great around town at low speeds, it takes some getting used to when you up the pace.
For many company car drivers, the most crucial measure will be at the tailpipe – and this is where the XF falls short. It puts out 20g/km less CO2 than the 3.0-litre V6 diesel model, at 149g/km, but lags way behind its manual opponents, and is the most expensive choice for business users. Worst-on-test economy figures of 32.1mpg also suggest the writing is on the wall for the charismatic Brit.

Chart position: 3WHY: Brit is a former Auto Express favourite, and promises to provide more charisma than its competitors. The question is whether this character comes at too high a price.