Is luxurious super-saloon just as compelling with diesel power? 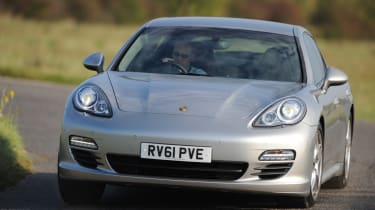 8
Many Porsche purists will be upset by the idea of a diesel-engined model – it’s like finding a moustache has been felt-tipped on to the face of the Mona Lisa.
But the Cayenne Diesel proved that diehards needn’t have worried. It’s the best model in the SUV line-up, and has been a huge sales success.
Video: watch CarBuyer's video review of the Porsche Panamera
[[{"type":"media","view_mode":"content_narrow","fid":"68702","attributes":{"alt":"","class":"media-image"}}]]
Advertisement - Article continues below
So now it’s the turn of the Panamera saloon to benefit from the diesel treatment. It gets the same 3.0-litre V6 engine as the off-roader, and promises to combine 50mph performance with 40mpg fuel returns. Adding to its appeal are stop-start technology and an efficient eight-speed automatic gearbox – both help keep CO2 emissions down to 172g/km.
Visually, there’s little to distinguish the newcomer from other Panameras, which means you get the same controversial styling. At the front is Porsche’s usual family face, while the low and wide stance gives the car a much sportier appearance than the sleek Jaguar. However, the bulbous, ungainly rear end won’t be to all tastes.
There are unlikely to be any complaints about the interior, with its eye-catching design and beautiful build. A wide and high-set centre console dominates the cabin, while the driver gets a low-slung seating position and a large, centrally mounted rev counter, which reinforce the Panamera’s sports car credentials.
Yet despite the use of top-notch materials and the flawless construction, the car doesn’t feel as special inside as the XJ. And while it’s every bit as spacious as its rival, it’s only a four-seater.
Advertisement - Article continues below
Advertisement
Advertisement - Article continues below
Look past this, and you’ll find the Porsche is a remarkably practical option. The hatchback tailgate adds a welcome dose of versatility, while the 445-litre load bay is smaller but better shaped than the Jaguar’s. What’s more, the rear seats can be folded flat, liberating a useful 1,263 litres of carrying capacity.
But it’s the Panamera’s pace that really impresses. Any concerns that slipping a diesel engine under the bonnet of a Porsche would damage the brand’s high-performance reputation are blown into the weeds the moment you squeeze the throttle pedal.
With its muscular power delivery and sporty growl, the 247bhp 3.0-litre could easily be confused with a petrol engine. Even at idle it’s near-impossible to detect any diesel clatter.
At the test track, the Panamera demolished the 0-60mph sprint in 6.3 seconds – a full six-tenths quicker than the lighter and more powerful XJ. Aiding its straight-line advantage is the eight-speed auto transmission, which makes the most of the available performance with its rapid and slick shifts. This petrol-like acceleration doesn’t come at the expense of fuel efficiency, though.
Advertisement - Article continues below
The Panamera returned 32.6mpg with us – a remarkable figure considering it included our performance testing at the track, and 5.6mpg higher than the Jag. In everyday use, owners are likely to achieve nearly 40mpg.
As you’d expect, the traditional Porsche strengths come to the fore when you guide the Panamera through a series of bends. Well weighted and communicative steering combines with strong grip and excellent body control to deliver an engaging and entertaining driving experience.
Press the Sport button, and you can turn up the wick – as this sharpens throttle response and speeds up gearchanges. The powerful and fade-free brakes also deserve special mention, as they brought the Porsche to a standstill from 70mph in only 41.5 metres – that’s four metres less than the XJ.
Away from back roads, the Panamera has to give best to its rival. While its low-speed ride isn’t as irritating, it can’t match the luxurious Jag for long-distance comfort and refinement.
Still, for many buyers this will be a small price to pay for the superior driving dynamics. And while the Porsche costs more and has less kit, it’s a better bet in the long term due to its superior efficiency and emissions, plus stronger residuals. So, has it done enough to scoop victory in this battle of sporty diesel saloons?

Chart position: 1WHY: Bold Panamera saloon is second model in the Porsche line-up to get the diesel treatment. Punchy 3.0-litre V6 TDI promises petrol car power and pace, but with reduced running costs.