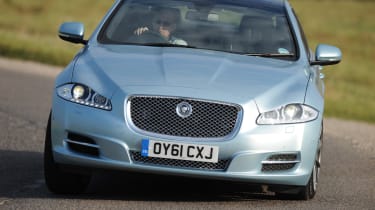 8
When it comes to mixing cosseting luxury and sporty driver appeal, the Jaguar XJ takes some beating. Thanks to its lightweight aluminium construction and beautifully trimmed cabin, the limousine manages to entertain and pamper in equal measure.
Factor in the lusty V6 diesel, and you have a car that represents a stern test for the Porsche. The Jaguar certainly has its ungainly rival beaten on looks.
Advertisement - Article continues below
Video: watch CarBuyer's video review of the Jaguar XJ
[[{"type":"media","view_mode":"content_narrow","fid":"68507","attributes":{"alt":"","class":"media-image"}}]]
Unlike previous range-topping Jags, it boasts refreshingly bold and modern lines. A gaping chrome grille, low-slung roofline and distinctive LED tail-lamps help it stand out from the crowd. Only the awkward black panels on the C-pillars spoil the otherwise sleek and sophisticated appearance.
Designers have been equally daring with the XJ’s cabin. The generous use of wood and leather trim leaves you in no doubt about the car’s traditional Britishness, but the bold dashboard design and hi-tech LCD instruments are bang up to date. And while it’s not as sporty and driver-focused as the Porsche, the interior does feel much more luxurious and upmarket.
Unlike its strict four-seater rival, the Jag can accommodate five adults – although taller passengers riding in the back will find their heads brushing the ceiling.
Open the powered tailgate and there’s a generous 520-litre boot, which has a 75-litre advantage over the Porsche. The Panamera is a more versatile choice, though, due to its hatchback opening and folding rear bench.
Advertisement - Article continues below
Advertisement
Advertisement - Article continues below
The Jaguar also trails on straight-line pace. It was left behind in our acceleration tests, even though its 271bhp 3.0-litre V6 diesel offers more power and torque. But out on the road, the differences between the two are harder to detect.
With its muscular mid-range delivery, the smooth XJ engine provides effortless overtaking pace. The six-speed gearbox, which serves up seamless shifts in auto mode and responds crisply to the steering wheel paddles, also impresses.
Given its bulky exterior dimensions, you’d expect the XJ to struggle in corners. Yet the lightweight aluminium underpinnings and sharp steering ensure it feels agile.
Select Dynamic mode, and the responses are sharpened further and the instrument backlighting turns a menacing red. And while grip and body control aren’t as strong as in the Porsche, the XJ is an engaging and entertaining choice.
The trade-off for this dynamic ability along twisty roads is a poor ride. Big bumps are shrugged off easily enough, but over smaller imperfections the Jaguar fidgets constantly, which soon becomes wearing. The firmer Panamera is a more comfortable choice.
The XJ’s chances in this test are dealt a further blow at the pumps. During its time in our hands, it could manage fuel economy of only 27mpg. The Porsche was 5.6mpg more efficient, despite offering superior performance.
The XJ costs £59,315 – that’s £3,984 less than the Panamera, and enough of a saving to pay for a year’s worth of fuel. The question is whether this makes up for the car’s flaws elsewhere.

Chart position: 2WHY: Rakish Jaguar sets itself apart from other luxury limousines with its sharp and sporty handling. Muscular diesel engine and beautifully finished cabin add to the considerable appeal.