Is the electric pioneer still the class leader? 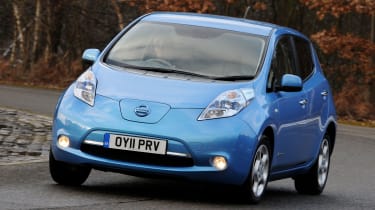 8
Nissan has made a name for itself of late with several ground-breaking models. Cars like the Qashqai and Juke show the company isn’t afraid to go out on a limb. The Leaf’s status as the first all-electric family car on the market makes it the benchmark against which all others will be judged, and it sets a high standard.
In isolation, the Nissan looks quite normal, but when you park it beside the conventional Fluence Z.E., the differences are stark and the styling is futuristic. That impression is only heightened by the advanced interior design.
Advertisement - Article continues below
You start the Leaf by pressing a button, not turning a key. A subtle chime tells you you’re ready to go, just like starting your computer. The illuminated graphic displays and hi-tech readouts are perfectly in keeping with the advanced drivetrain – and totally at odds with the Renault’s dull dashboard.
It’s hard not to notice the significant differences between the two cars, even before you reach double figures on the digital speedo. In the Nissan, you select the driving mode using an unusual round selector, while the electronic handbrake is operated by pressing a stubby lever, not by pulling or releasing a handle.
The rest of the cabin looks thoroughly modern and creates a special atmosphere. On the downside, some of the materials used are hard and brittle, plus the light upholstery feels cheap and marks quite easily.
Advertisement
Advertisement - Article continues below
Performance from a standing start is lively and the Nissan reacts noticeably quicker than the Renault when you prod the accelerator. It covered 30-50mph in 3.9 seconds – nine tenths faster than its rival – and was two seconds quicker from 50-70mph, taking seven seconds dead. The Leaf is also quieter and has lighter, more responsive steering.
Advertisement - Article continues below
There’s more body roll than in the Renault. but the firmly sprung Nissan is grippy and just as comfortable as its rival. Both cars struggle slightly with bumps at low speeds, but not so much that you’ll be having second thoughts about taking the electric plunge.
The Leaf easily beats the Fluence Z.E. for practicality. Its 330-litre boot is bigger, with a more useable shape, plus its rear seats fold to create a 680-litre load space. There’s little between our duo for rear legroom, but the Fluence Z.E. feels bigger in the back thanks to its larger windows; the Leaf’s rising waistline makes rear passengers feel more hemmed in. Not that they’ll be forced to sit there for long, though: a realistic range of 60 miles means you won’t be doing any long journeys.
To make the most of this limited range, the standard sat-nav will direct you to charging points and show how far you can travel on the remaining charge. The Renault does this, too, but the Nissan’s interface is easier to use. It makes the Fluence Z.E. look like an older car, rather than the newcomer it actually is.

Chart position: 1WHY: As the original electric family hatch, the Nissan is the car the Renault must beat. The bar has been set pretty high.