Cheaper alternative aims to be first serious challenger to Leaf 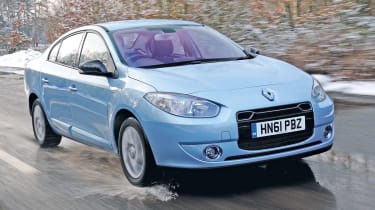 8
According to Renault, 87 per cent of car journeys cover less than 37 miles. With a claimed range of up to 115 miles, the company’s Fluence Z.E. should have plenty of potential customers, then – but is it the best all-electric family car on the road?
Not from a styling perspective. The Fluence is sold in European markets with normal petrol and diesel engines and is based on Megane underpinnings. Hardly the best starting point, but to make matters worse, the Z.E. version is 13cm longer in order to fit the large battery pack behind its rear seats.
Advertisement - Article continues below
As a result, the Renault isn’t as attractive as the quirky Nissan. It looks old-fashioned rather than futuristic, even in top-of-the-range Dynamique trim, where glitzy light clusters and 16-inch alloy wheels do nothing to disguise the Fluence’s humdrum roots.
Things don’t improve inside, as the dash is taken straight from the Megane. Material quality is fine – it features more soft-touch plastics and higher-quality fabrics than the Leaf – but the design feels very ordinary after you’ve spent time in the Nissan.
The black-and-white digital range read-out in the instrument cluster looks cheap, the radio is fiddly and the standard sat-nav looks like an afterthought perched on top of the dash. You also get a conventional shifter for the transmission and a traditional handbrake. At first glance, you’ll be hard-pressed to spot anything advanced here at all, which is a surprise for a supposedly futuristic EV.
Advertisement
Advertisement - Article continues below

This can all be traced back to the Fluence Z.E.’s biggest selling point: its price. At only £18,395 after Government incentives, the Renault is £7,595 cheaper than its rival, although its hi-tech lithium-ion batteries aren’t included in the cost – you lease them for an additional monthly amount. Renault hopes this will reassure buyers worried about the lifespan of the costly batteries. A three-year/18,000-mile contract is £76 per month, or an extra £2,736 in total.
Advertisement - Article continues below
That still leaves the Fluence with price on its side, but there are other compromises. For a start, it only comes with a charging cable for the special Wall-Box charger. This offers faster charging, but you need to have it installed in your home by British Gas at a cost of £799. A cable allowing you to use a regular domestic three-pin socket costs another £414.
To make the most of the Z.E., you’ll need both, as the car charges more quickly using the Wall-Box, but you’ll also want the ability to top up from an ordinary socket when necessary. A full charge using the Wall-Box takes nine hours, compared to 12 with a normal socket, and it should cost around £3 depending on your electricity supplier.
Based on our experience, this will allow you to drive around 60 miles, not the 115 miles claimed, but using the heater or air-con cuts this significantly. The Leaf offers a similar range, so the Fluence Z.E. is competitive, and a standard public charging point should give you around 12 miles from an hour-long recharge.
Advertisement - Article continues below
Turn the key in the conventional ignition and the Renault starts up silently. Progress is as smooth and quiet as you’d expect, but its motor develops only 226Nm of torque; that’s 54Nm less than the Nissan’s. Our testing reflected this as the Fluence trailed the Leaf by 2.2 seconds from 0-60mph, with a time of 12.5 seconds.
In reality, you’ll rarely be tempted to use full acceleration, for fear of exhausting the batteries too quickly. The firm yet comfortable ride and light steering make the Fluence easy to drive, while the spacious back seats help it live up to its family car billing. Yet a cramped 317-litre boot and fixed rear bench mean it’s still beaten by the Leaf for overall practicality.
Refinement is good, but we noticed a more obvious high-pitched whine from the electric motor than in the Leaf. Also, the Fluence Z.E.’s ordinary cabin takes the edge off the experience. So while the Renault has price on its side, that may not be enough to guarantee victory here.

Chart position: 2WHY: The Renault isn’t the first all-electric family car, but it’s a much cheaper option than the Nissan.