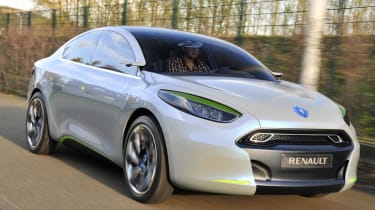 THE most conventional of the passenger-car trio, the Fluence is pretty much showroom-ready as it’s based on the upcoming next-generation Mégane saloon.

As with the Zoe, it gets a front-mounted 95bhp electric motor, while the lithium-ion batteries slot in between the boot and rear seats, essentially where the fuel tank would normally be. Piloting the Fluence is remarkably simple: just twist the circular gear selector on the centre console to Drive, and off you go. Response is instant and peppy, while refinement is surprisingly good. The motor whirs away quietly, and with light, accurate steering it’s a relaxing place to be.

Other than the effect of the regenerative brakes, which results in strong deceleration if you lift off the throttle, the Fluence is very easy to get used to. And that’s the point. “It is simply a traditional car with an electric engine,” says head of concepts Stephane Janin. The production version should do 0-60mph in nine seconds with a top speed of around 90mph.

Although we could test the Fluence only at low speed, it certainly felt capable of hushed motorway cruising. What’s more, it can go from zero to 80 per cent charged in 20 minutes and has a range of around 100 miles. When it goes on sale in 2011, it will be the first electric Renault to make use of the Quickdrop system, which will allow drivers to pop into a special centre and have the battery swapped for a fully charged unit while they wait. The process takes mere minutes.

Of course, that depends on Renault having the infrastructure in place in time – otherwise, a diesel Mégane will look a lot more attractive. Let’s hope the firm is ready, because our test drive suggests the electric Fluence has a lot going for it.

Read our first drive of the Renault Twizy

Read our first drive of the Renault Zoe