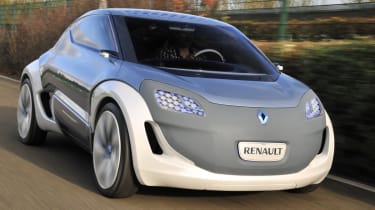 THIS is Renault’s take on a future electric sister car for the Clio. Don’t expect its butterfly-style rear openings – which give access to the boot and back seats – or teardrop proportions to make it to the showroom version. Renault’s Stephane Janin admits there’s much work to do in “rethinking the shape” – but it will still be a four-metre-long supermini.

Plenty of other ideas on the concept will make production. Most important is the 95bhp electric motor (mounted at the front) and lithium-ion batteries (under the seats), which can be charged at a conventional socket, or fast-charged from a high-voltage supply to 80 per cent in only 20 minutes. Alternatively, you can swap them for a new pack at a Renault Quickdrop centre.

With a range of 100 miles and a top speed of 90mph, the Zoe should keep most buyers happy. Compared to the other concepts, it feels least production-ready in the way it handles, but it’s responsive and amazingly quiet. What’s more, it has some lovely details.

Jump inside and you’re greeted by an incredible dash layout with an on-screen ‘avatar’ – an animated character who looks a bit like Super Mario crossed with Fernando Alonso! He tells you when you are driving efficiently, giving you advice on how to get the best out of the batteries.

Other details include rear seats with backrests that fold into the sides of the car, a peeble-like 'key' which rests on a dish next to the wheel and contains the chip used to start the car (it can be swapped for any small object the owner desires) and a see-through roof that features solar panels which run the air-conditioning system.

Read our first drive of the Renault Twizy

Read our first drive of the Renault Fluence