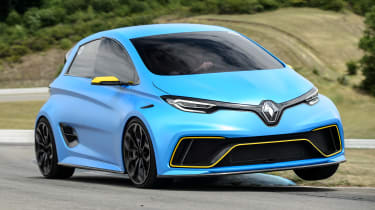 The Renault ZOE E-Sport is a highly amusing car to drive, and one that provides an intriguing glimpse into the future of the hot hatch, even if it doesn’t last more than 30 minutes if you drive it hard. But one day you’ll be able to buy a car like this, and the world will be a far more interesting place for it.

The Renault ZOE E-Sport will never see the light of day as production car, according to Renault. Instead, it’s a concept that offers a glimpse into the future as to what might be possible from an all-electric hot hatch in years to come. And we’ve driven it.

In many respects, it’s a shame the E-Sport won’t go any further, because it flips the idea of an EV on its head. It’s one that has huge power and performance, stunning good looks and a highly amusing four-wheel-drive chassis. Beneath its bespoke, lightweight carbon fibre bodywork, the E-Sport boasts a unique chassis and two electric motors, one for each axle, while under the rear bodywork sits a lithium-ion battery pack.

In total, the E-Sport produces a combined 456bhp and 640Nm of torque from its twin electric motors. That means it’s rapid, despite its relatively chunky 1,400kg kerbweight. Renault claims it can hit 0-62mph in a comical 3.2 seconds, before reaching its top speed of 130mph in just 10 seconds. 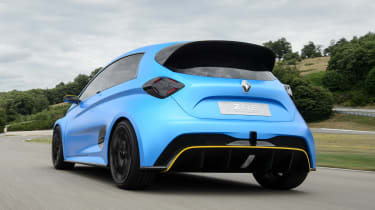 Although the E-Sport looks broadly like a ZOE on the outside, albeit one that’s been to the gym and sprouted all sorts of extra muscles, on the inside it is pure racing car with bucket seats, a fully digitised dashboard and a six-point harness.

Climb aboard – which requires a reasonable amount of dexterity in itself due to the ultra high-sided race seat – and the E-Sport looks and feels just like a racing car. Except for its dashboard, which is more like the command centre for the Millennium Falcon, with buttons and lights everywhere.

In the centre of the dash sit three big blue buttons that enable you to switch between forward, neutral and reverse, and to engage the highest voltage settings. It’s a simple yet highly complex car inside, and the various whooshes and fizzes that arrive when you select high voltage and press the accelerator gingerly are also strangely intimidating.

Move away and the ride is very firm, the ultra stiff suspension picking up and relaying every last grain of tarmac straight to your backside. It’s what happens when you plant your right foot that provides the biggest shock of all, however, because the E-Sport takes off in a way that only electric cars do, on account of their instant delivery of torque. The resulting thump of acceleration is immense to begin with, although it does tail away slightly, maybe because the initial hit is so strong.

Either way, the E-Sport feels every bit as quick as Renault claims it is, and the absence of engine noise is well and truly compensated for by the sounds that emanate from the diff, the battery coolers (which fizz ever more loudly the faster you go) and those vast 20-inch wheels. And mostly it has the handling to match, even if it does have a tendency to push on under power at the exit of most corners, in much the same way as most powerful front-wheel-drive cars do.

To be honest, the E-Sport’s chassis isn’t quite the finished article, because ultimately it’s still just a concept car. If anything, the front motor feels like it does more work than the one at the rear. Given time, Renault’s engineers would probably dial its influence back a bit to make the E-Sport feel a bit more neutral and balanced. 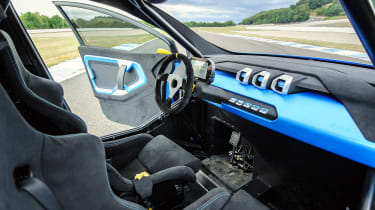 Click on the gallery above for more of the Renault ZOE E-Sport concept...