Fully electric four-door saloon promises practicality and zero emissions, but does it deliver? 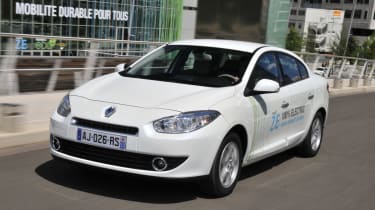 EVEN though it’s being called a prototype, the Fluence is essentially a finished product – and it’s a very polished package. Performance is strong thanks to the plentiful torque output, and it handles well, although the harsh suspension needs tweaking. A limited range appears to be the only downside – and that won’t put off early adopters attracted by a price that undercuts Nissan’s Leaf by some margin. But for it to be a real success, a nationwide charging infrastructure is needed.

Meet the star of Renault’s  electric future! This is the Fluence Z.E, one of four zero-emissions cars the firm plans to produce over the next two years. The car you see here is technically still a prototype,  but aside from a stretched  rear to accommodate more boot space, the production model will be identical.

While it isn’t as eye-catching as the early concept we drove in Issue 1,088, it has a clean design, thanks to those bold headlights and sleek profile. The style continues inside, where the smart dashboard is well laid-out and finished in soft-touch materials that give the cabin a premium feel.

A large battery gauge replaces the rev-counter,  and a kW scale shows the instantaneous power you’re consuming. Turn the key and you’re greeted with silence – a green light on the dash is the only clue you’re ready to pull away. Power comes from a 70kW (95bhp) motor, which packs 260Nm of torque from zero revs – that means instant and unrelenting acceleration, despite the meagre output.

Thanks to the consistent torque and eerie silence, the Fluence feels more like a luxury limousine than a family saloon. Our model had a tendency to crash over potholes, but Renault bosses insist the  ride will be smoother on  final production versions.

Despite carrying a 250kg battery pack, the Fluence Z.E weighs only around 50kg more than a fully brimmed, petrol-engined Fluence. As a result, it’s nimble and good  fun through corners, thanks  to light but precise steering.

Unfortunately, the real-world range is only 100 miles – with  a charge from a household plug taking six-eight hours, long trips are out of the question. But Renault is working hard to establish an infrastructure of high-voltage charging points that should offer 20-minute top-ups and, looking further into the future, instantaneous battery swap stations. With that in place, the Fluence will be a worthy flagship for an electric Renault range that will include the Zoe, Twizy and Kangoo. If it can also deliver on its impressively low target price, it’s certain to be a roaring success.