All-electric Renault Fluence Z.E. is the first zero-emissions saloon – but is it any good? 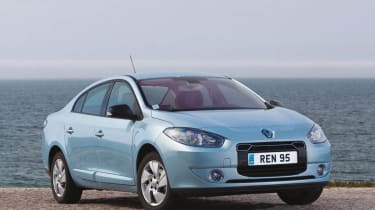 With reduced running costs, maintenance costs and insurance costs the Fluence ZE makes good financial sense if you can live with the limited range. That's even before you consider the smooth and quiet driving experience you get with an electric motor. Those that do opt for a Fluence ZE will be rewarded with an electric car that comes with very few compromises. And unlike most other electric vehicles it doesn't carry an astronomical price-tag because of the leased batteries.

Electric vehicles are currently limited to hatchback models like the Nissan Leaf – but Renault is about to change all that with the introduction of the Renault Fluence Z.E. saloon.
While you might not recognise it, the Fluence is already produced for European markets with a traditional combustion engine. In this Z.E. guise it’s powered by a 70kW electric motor – about 94bhp – and produces 226Nm of torque.
To fit the Fluence with the batteries necessary to power an electric car, Renault engineers have had to stretch the body by 130mm and it shows in the slightly awkward silhouette. Otherwise though, the Fluence Z.E. looks like any other car and, aside from the charging flaps on both front fenders, you’d be hard pushed to tell it was an electric vehicle. Look closely though and the giveaways are blue tinted lights and badges.

Inside is a well-built cabin with soft-touch materials covering the dashboard and a range of solid feeling buttons and switches. This car’s battery-powered status is marked out by bespoke dials and a few Z.E. badges.
Changes under the skin are more thorough. The electric motor is about 40kgs lighter than a traditional diesel engine but the batteries – located at the rear – add an extra 280kgs. This makes the front suspension softer while the rear subframe has been strengthened to deal with the extra weight.
The driving experience is typical of an electric car with 226Nm delivered from a standstill. That allows for punchy acceleration that's so impressive we couldn't believe the official 0-62mph time of 13 seconds. Meanwhile the lack of vibration and noise from the engine do wonders for refinement around town.
Handling is safe and predictable but never particularly rewarding. This feels like a car more geared for town driving with a soft ride and light, but precise steering.
Range is still a concern though, with Renault claiming an official figure of 115 miles, dropping as low as 50 miles under the worst conditions. By contrast they say good conditions will allow for up to 125 miles of zero tailpipe emissions motoring.
To top up the batteries you can get a Wall-Box installed at your house for £799 which will fully charge the battery in six to eight hours – charging from a normal 240v socket will take between 10 and 12 hours.
At launch Renault is only offering one version of the Fluence – called Prime Time – and it costs from £17,850 including the £5,000 government grant for electric vehicles.
The price is so low because it doesn’t include the expensive batteries; instead Renault will lease these to you on a monthly basis. For example a 9,000-mile-a-year lease over three years will cost £81 – though covering 15,000 miles a year will warrant a monthly cost of £103.80.
Share this on TwitterShare this on FacebookEmail