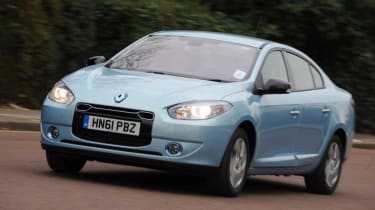 On paper, the Fluence makes sense. It’s cheaper than a Nissan Leaf, and by leasing the batteries, you can take advantage of developments in technology. However, it’s bland to look at inside and out, and we couldn’t get near Renault’s range claims. It feels like a normal car that’s had EV status forced upon it. Wait for the purpose-built Zoe hatch.

Renault is investing heavily in electric cars: this Fluence is the first of four models due to go on sale this year.
It’s a modified Megane-based saloon with a 95bhp electric motor at the front and a battery pack behind the rear seats.
Prices start from £17,495 including a £5,000 Government grant, making it around £8,000 cheaper than the Nissan Leaf. But that’s only part of the story.
Unlike the Leaf, you lease the Fluence’s batteries, which partly explains the lower price. A 9,000-mile-a-year lease will cost you £69 per month over three years, totalling £2,484.
So does its case stack up in real life? The Renault doesn’t get off to a great start. To squeeze those batteries in, engineers had to stretch the Megane by 13cm, and that leaves the car looking awkward. Blue detailing on the spotlights and grille doesn’t really help matters.
Inside, don’t expect Leaf-style digital displays and soft lighting. Apart from a range indicator and a charge meter in place of the rev counter, it’s unchanged from a standard Megane. You even start the Fluence with a regular key.
On the move, you really notice the batteries’ extra 280kg. But the steering is smooth, the ride is comfortable, and with 226Nm of torque, it feels faster than its 0-62mph time of 13.7 seconds.
Renault claims a longer range than Nissan – up to 125 miles – after a single 10-hour charge from a household socket. But although our test model arrived almost fully charged, the range meter showed only 44 miles. After 12 miles in the city, this fell to 17.
Maybe it was the cold weather, but this was way below Renault’s claims and didn’t inspire confidence.
Share this on TwitterShare this on FacebookEmail