Tourer version of MPV favourite is an upmarket, spacious choice 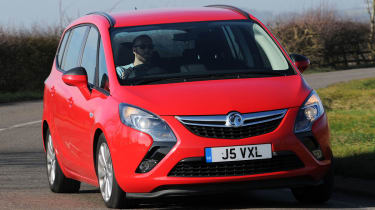 8
Vauxhall's latest MPV hasn’t enjoyed the easiest start to life. The company developed the Zafira Tourer in a bid to emulate Ford’s success with the S-MAX, but it lost to the Ford on its first Auto Express road test. While we found plenty to like about the newcomer, it was ultimately let down by a lack of space – but this shouldn’t be an issue against the smaller Grand Scenic.
The Zafira Tourer is the smarter-looking car and those eye-catching headlights lend it a purposeful appearance that’s missing from the Renault. The higher window line also gives the Vauxhall a slimmer profile, but Exclusiv spec comes with simple plastic wheel trims – a set of 17-inch alloys will set you back £360.
Things improve once you’re inside, where there’s clearly been a concerted effort to give the Zafira Tourer a premium feel. From the chunky grab handles in the doors to the well damped switchgear on the centre console, everything you touch has a sturdy and high-quality feel that goes some way to justifying the £23,950 price tag.
The driver-focused cabin has a welcome familiarity after the leftfield Scenic, but Exclusiv models like ours make do with a hard plastic steering wheel rather than a classy leather rim, and even basic kit like Bluetooth isn’t included as standard. In contrast, the Renault features push-button start and sat-nav, so if you like gadgets and gizmos, the Vauxhall comes a distant second here.
The Zafira Tourer’s trump card is its clever seating system. All five rear seats fold into the floor, leaving it fully flat and giving 1,860 litres of space. And if you’re only carrying two passengers in the middle row, the centre seat can be stowed and the two outer seats slide in to free up elbow room. Even so, small niggles like the tiny upper and lower gloveboxes and limited headroom in the third row of seats are frustrating.
On the road, the Zafira Tourer claws back some of its lost ground because Vauxhall has given it nimble handling for such a tall-sided vehicle. Body roll is well controlled and the steering is more immediate and precise than in the Renault.
The trade-off for this dynamic poise is a bumpy low-speed ride, which means the Vauxhall doesn’t feel as comfortable or poised as its rival over poorly surfaced roads. The 2.0-litre diesel engine also clatters noisily under load, and it lacks the sharp responses of the Scenic.
Long gearing doesn’t help here, but in our hands the Vauxhall beat the Renault for economy, registering 42.5mpg compared to 39.7mpg. Other cost-saving factors include stronger residual values and a much lower insurance group rating, while Vauxhall’s Lifetime Warranty offer also helps to swing things back in its favour.

Chart position: 2WHY: Zafira Tourer has premium looks, a versatile seating system and engaging dynamics. Can it topple the great-value Renault?