Revamp has given long-time favourite a new lease of life 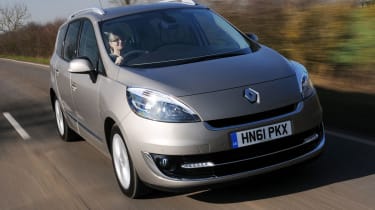 8
Renault is an established player in the people carrier market, with a fine tradition of innovation that stretches back to the original Espace in the eighties and the nineties Scenic. However, time moves on, and Renault has implemented a thorough overhaul in an attempt to ensure the Grand Scenic can keep pace with new challengers such as the Zafira Tourer.
The simplified range has a single trim level, but the Dynamique TomTom model is well equipped, and its exterior has undergone some minor surgery in a bid to shift it upmarket. The main focus of the styling overhaul is at the front, where slimmed down headlights, smart LED strips and an extended lower grille with chrome inserts distinguish it from the outgoing car.
The big glass area and high roofline mean that space still comes before style – but the Renault is now far prettier than key rivals like the clumsy Ford Grand C-MAX. Smart 16-inch alloys are fitted as standard, but larger 17-inch ‘Plenum’ ones are available free of charge.
The interior is equally generous, as there’s now more equipment thrown in as standard. Dynamique TomTom spec comes laden with feelgood extras like a leather-wrapped steering wheel, automatic lights and wipers, push-button start, rear parking sensors and an excellent TomTom sat-nav system.
Best of all, the unfathomable stereo of the old car has been swapped for a vastly improved design, so you no longer have to fiddle with knobs and buttons simply to change the radio band. Some of the interior plastics do feel a little flimsy when compared to the sturdier Zafira, but the Scenic cabin is refreshingly different from the norm and better than before.
What hasn’t changed is the vast amount of space on offer inside. Despite being 85mm shorter than the Vauxhall, the Renault has a longer wheelbase and, according to our tape measure, the edge on room. The Grand Scenic has the longest boot in two, five and seven-seat configurations, and better legroom in the second and third rows. The middle row of chairs all slide and recline independently, and the fact they can be tumbled means access to the third row is far easier than in the Vauxhall.
However, there are still some quibbles – the Grand Scenic’s seats don’t fold flat into the floor like they do in the Zafira Tourer and removing them is tricky as they’re heavy. And if you do make the effort to take them all out, you’re left with an uneven floor. The trade-off is a van-like load capacity of 1,863 litres.
When it comes to engine capacity, the 128bhp 1.6-litre Renault trails the 128bhp 2.0-litre Vauxhall. However, the Grand Scenic proved to be comfortably quicker than its rival in our 0-60mph and in-gear tests. That’s partly because the Renault weighs a useful 137kg less than the Vauxhall, but mainly because the 1.6-litre dCi engine is a revelation, delivering a smooth surge of mid-range torque that makes the Scenic an effortless motorway cruiser.
The Renault is also quieter than its rival at idle and this extra refinement, combined with its softly sprung ride, makes it perfect for longer journeys. It does have its drawbacks, though, as the more forgiving suspension doesn’t control body roll as tightly as the firmer Vauxhall’s – although grip is still strong.
The gearshift isn’t as slick and precise as the Zafira Tourer’s, but it’s important to remember these are family cars and we much prefer the Grand Scenic’s supple ride to the firmer set-up of the Zafira Tourer.
On paper, the Renault is the more efficient choice, but in our hands it trailed the 42.5mpg of the Vauxhall at the pumps. Still our return of 39.7mpg is respectable enough and Renault’s novel new 4+ aftersales package makes it a tempting buy. Factor in its bigger cabin, higher kit count and more comfortable ride, and the Grand Scenic is still a force to be reckoned with in the compact MPV market.

Chart position: 1WHY: Ageing Scenic has been given a makeover and still offers plenty of space and practicality, plus a refined drive.