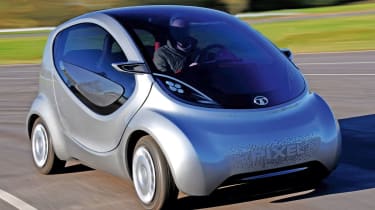 The zero turn technology in this Tata Pixel is a shining example of lateral thinking by British engineers. And it works, allowing you to squeeze in and out of unfeasibly small spaces and practically turn on the spot. This technology could definitely be transferred to black cabs and city cars of the future, as the towns we live in become ever more congested. Watch this space.

When Tata revealed the Pixel concept at March’s Geneva Motor Show, it showed CGI footage of the car doing U-turns in narrow streets and parking in spaces that drivers of conventional cars could only ever dream about.

It has taken Tata’s UK-based engineering team – led by Nick Fell, the man behind the MGF – the past 18 months to perfect the patented zero turn technology, and we got a world exclusive first drive.

“There was an eagerness to show Tata’s growing technical capability,” said Fell. “Particularly to look at something distinctive in a low-cost, low-carbon vehicle.”

Key to the zero turn tech is the unique MacPherson front suspension and steering mechanism that allows the front wheels to tuck back into themselves when turning left or right at angles of up to 105 degrees. Equally important are the two Torotrak variators that counter-rotate the rear wheels as the car pivots around the centre of its rear axle. The team is working on a system that will enable or disable the zero turn capability at a still-to-be-determined speed.

To simplify matters and reduce costs, Tata is developing software that will use the ABS or a modified electronic brake to lock the inner wheel, instead of the complex Torotrak system. “It’s worked well,” says chief test engineer Martin G. Jones. “But it’s costly, and we need to reduce that.”

The simpler set-up widens the turning circle, but by such a small degree that drivers won’t notice any difference to true zero turn.

Tata plans to have a functional Nano running with the system in a year’s time, and then fit it to a version of the range-extending Megapixel, seen at Geneva.

The Pixel we drove feels like any other city car, despite its ability to pivot in its own length. Although the concept car used a three-cylinder 1.2 diesel, this prototype had the 624cc petrol from the Nano – and it struggled for power. But that’s not the point; it’s all about the Brit-designed steering tech. It’s easy to imagine zero turn on a taxi or delivery vehicle, never mind commuter cars of the future.