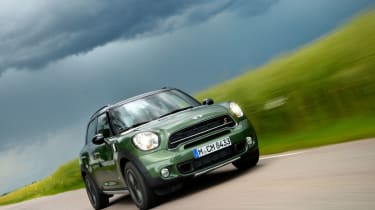 We call it a mild update and MINI calls it the ‘new Countryman’, but whatever label you choose to give it, the MINI crossover is selling well, and this refresh is aimed at keeping things that way.

Visually, it’s worth walking you through the changes because they are pretty subtle – apparently the customer feedback for the design has been positive enough that nothing really needs changing. So our Cooper S model now comes with an ‘S’ badge in the grille, which also now has a chrome bar running through it and a new Piano Black Exterior option pack can be seen in the black surrounds for the headlights and rear lights.

Other changes are just as subtle, including a new optionally available set of LED foglamps like the ones fitted to our car along with the fresh Jungle Green paintjob. If you go for four-wheel-drive you’ll notice some metal skid plates under the front and rear bumpers.

All the engines now feature lower CO2 emissions and are also all EU6 compliant. Our Cooper S ALL4 model, for example, sees emissions fall from 157g/km to 148g/km, while fuel economy is slightly up to 44mpg. It’s also the only engine that has seen an increase in power, albeit a meagre 3bhp boost up to 187bhp. 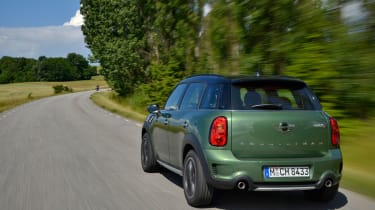 On the road that translates to a 0-62mph time that’s two-tenths quicker than before, at 7.7 seconds but the truth is it doesn’t feel any faster. Thankfully it doesn’t need to, either, with strong in-gear punch and enough torque to ensure you can get going in almost any gear. Apart from the pops from the exhaust on the overrun, it doesn’t sounds particularly good at high revs, though.

And that’s a shame because MINI has said it’s worked hard on isolating the cabin from the outside world. More sound-deadening has been added and the wing mirrors have been made more aerodynamic, but has it worked? It’s a subtle improvement and one that’s not quite enough to take the fight to cars like the new Golf but it’s an improvement nonetheless.

MINI has also tweaked the interior for more of a premium air but the changes are even more subtle than the outside. The things to look out for are the dark grey dials and chrome flashes on the air vents. All in all it’s still a nice-looking interior but the new MINI hatch has really upped the game and some of the Countryman’s scratchy plastics are beginning to look cheap. 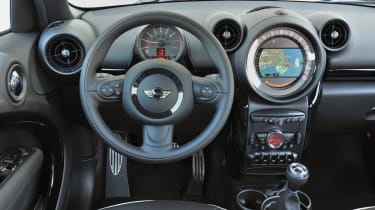 Another area MINI claimed its customers thought didn’t need changing was the ride and handling, so the chassis remains unchanged. As a result the Cooper S is still one of the sharpest crossovers out there, with quick steering and some of the agility of the hatch carried over. The suspension is still a fraction too firm, though.

Thankfully, it remains a fairly practical choice, with a 350-litre boot and back seats that are not only easy to access but also pretty spacious once you’re in. But the Countryman is no longer the only five-door MINI you can have, with the recently announced five-door hatch. In our eyes, that looks like better value. 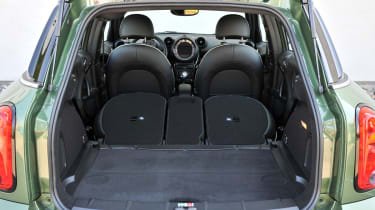 Not only do you get brand new engines, brand new tech and a more luxurious interior but you also get a lot of the Countryman’s practicality in a more traditionally MINI package. You can bank on it being a little better to drive, too.

You won’t be able to get four-wheel drive in the hatch but if you’re happy to settle for front-wheel drive, then you can save yourself around £2,500 by opting for the hatchback over the Countryman. Take all that in to account and the Countryman all of a sudden doesn’t have the appeal that it once had.