The Suzuki VanVan 125 is a fashion accessory scooter with real character behind it. 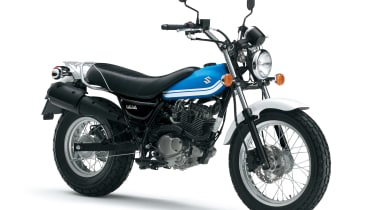 So good they named it twice, the Suzuki VanVan has been a cult bike since it was launched in 2003.

There’s no obvious reason, but then what cult has? The only one I can think of is that it looks cute in a funky, purposeful and retro kind of way, is fairly indestructible, and has built up a trendy following.

The brakes and suspension are, er, fairly basic, but that means there’s less to go wrong with them. Having said that, The VanVan has got a fabulous turning circle, a nice stable ride, an engine which purrs along forever as long as you stick to about 50mph or thereabouts, and the saddle is surprisingly comfortable even two-up after a long day bumbling along admiring the view.

Heavens, there’s even a luggage rack at the back. And a toolkit. What more do you want? A fuel gauge or warning light would help but otherwise, the essentials are there.