Volvo is aiming for the top of the executive saloon market with its new S90. So can it knock Mercedes' latest E-Class off its perch? 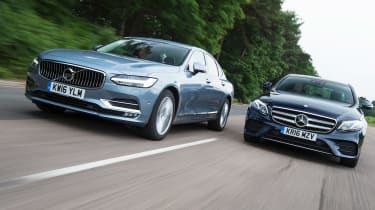 Volvo is a car company with big ambitions. Its stewardship by Ford is now a distant memory, and, so far, the signs are that new Chinese parent company Geely is helping the firm find its mojo as an alternative choice to the establishment.

Proof of Volvo’s return to form is the fact that the first model to appear under new ownership, the XC90, was our 2015 Car of the Year. However, can Volvo maintain its success with the next car to be launched, the S90 saloon?

It replaces the S80, which was a great-value executive, but as the newcomer uses largely the same technology as the XC90, it should be a more sophisticated and refined model than the car it replaces. 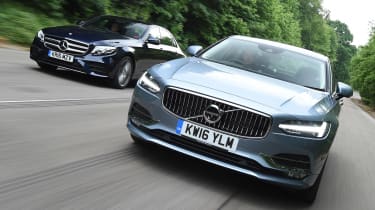 To find out how far Volvo has progressed, we’re throwing it in at the deep end for this first test, by pitching it against our current executive favourite, the Mercedes E-Class. The German saloon is all-new this year, and it saw off Jaguar and Audi rivals in its first test, so it has the all-round ability to give the Volvo a hard time.

The price overlap between the two model ranges is narrow, with the D4-powered Volvo delivering similar pace to the four-cylinder E 220d, and top S90 Inscription spec closely rivalling the AMG Line Mercedes for kit. 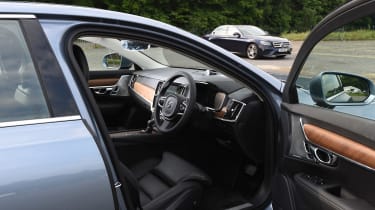 Both the S90 and E-Class aim to set new standards for exterior and interior design. The Volvo’s flowing lines and minimalist cabin create a cool and modern air, although it’s undermined by some poor detailing, such as the clumsy looking wood trim. The Mercedes’ styling isn’t as fresh, but it oozes premium appeal and is packed with hi-tech touches.

Volvo and Mercedes have been at the cutting edge of safety tech for decades, and these cars are no exception. The S90’s autonomous driving systems set new standards for Volvo in the class, while the Mercedes can automatically dial the emergency services if you’re in an accident. 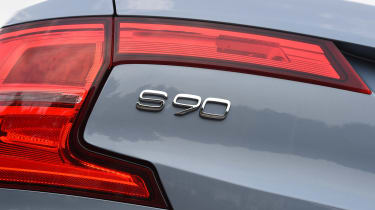 Currently, the cleanest Volvo S90 is the D4 tested here, which emits 116g/km and falls into the 23 per cent Benefit in Kind bracket. The Mercedes’ CO2 output will go as low as 102g/km if you opt for the entry-level SE that rides on the smallest 17-inch alloys. Its BiK is rated at just 20 per cent. 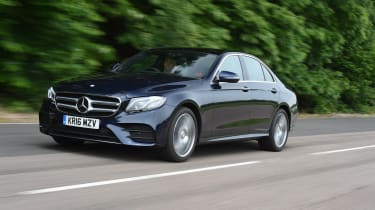 The E-Class’ reign at the top of the executive car tree continues. Yes, it’s expensive to buy and the options aren’t cheap, but the Mercedes’ strengths run deep and it feels a cut above rivals for quality, style and refinement. It’s also good to drive, while the new 2.0-litre diesel delivers all the performance you need. Crucially, low emissions mean business users don’t lose out despite the car’s higher price. 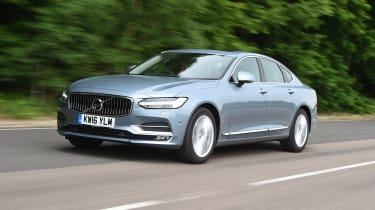 It has to give best to the E-Class here, but the new S90 proves Volvo’s success with the XC90 was no fluke. The newcomer looks good inside and out, is keenly priced and comes loaded with kit. It’s also comfortable, reasonably refined and packed with cutting-edge safety kit. Yet it’s not as polished to drive as the class leaders, while some aspects of the fit and finish could be improved. 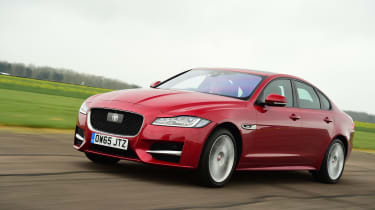 The XF came a close second to the E-Class in its first test. This lower-powered diesel with an eight-speed auto box emits 109g/km of CO2, so it scores wellon company car tax, while offering great handling and plenty of luxury touches. 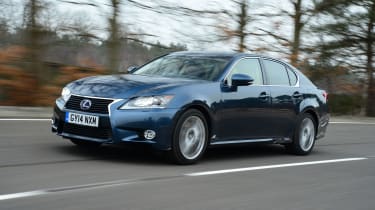 If the bottom line is your biggest concern, no rival comes close to the hybrid Lexus for tax costs. Higher-rate taxpayers will face annual costs £1,000 less than the Volvo’s, thanks to a 17 per cent Benefit in Kind rate. But the Lexus isn’t great to drive.