Volkswagen Passat Alltrack vs Audi A4 Allroad vs Subaru Outback

The off-road estate is a niche model that’s gaining popularity. We try three of the latest 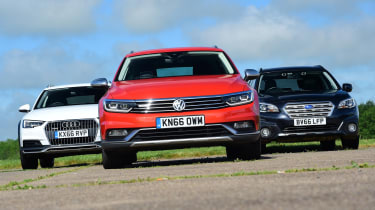 The increasing popularity of SUVs means that manufacturers are keen to cash in on the success of these rugged machines. Crossover models lead the charge, but there’s also rising demand for high-riding estates that combine a practical load-lugging body with raised suspension and four-wheel drive.

One of the latest to make its debut is the Volkswagen Passat Alltrack, which combines family car space and driving dynamics with genuine rough-road ability.

Hot on its heels is the Audi A4 Allroad, which is based on the latest A4 Avant estate. It’s more expensive than its immediate rivals, but promises plenty of upmarket appeal and is backed by the brand’s famed quattro four-wheel-drive technology.

However, it was Subaru that arguably pioneered the off-road estate concept around two decades ago with its Legacy Outback. Now in its fifth generation and just called the Outback, the Japanese machine boasts peerless off-road ability and a reputation for reliability.

So which of our tough trio will scrabble to victory in this encounter? Read on to find out. 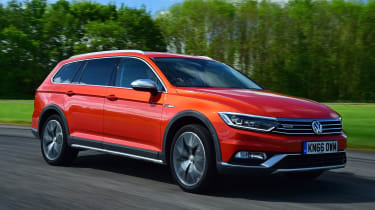 The Passat is in its seventh generation, but the high-riding Alltrack has only been around since 2011. It mates Volkswagen’s 4Motion all-wheel drive to an estate body and raised suspension. It’s available with one trim level and two engine outputs, and it’s the more powerful £34,905 version we test here.

Given that the VW and Audi use the same engine, it’s surprising how large a gap there was between the two at the track. This is largely down to their different transmissions, because the Passat’s six-speed DSG unit has more evenly spaced ratios. 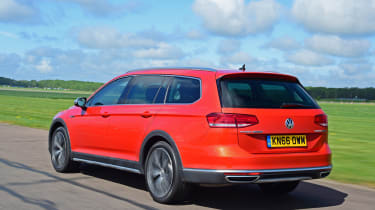 As a result, it accelerated from 0-60mph in 7.8 seconds, which was seven-tenths behind the A4. Yet the tables were turned in-gear, particularly in fifth and sixth, where the VW’s more sensible gearing allowed it to comfortably pull ahead.

On the road the differences are hard to detect, although the VW’s box appears to hold on to ratios for longer and has fractionally slower shifts. The Passat’s 2.0 TDI isn’t as well insulated, with more clatter at idle and a harsher sound when extended. It does settle down to a background hum when cruising, though.

Guide the Alltrack through a series of corners and it’s clear it’s the most engaging car here. Even with the optional dampers in their softest setting there’s greater body control than in either rival. Grip is also stronger and the VW’s torque vectoring system keeps the front wheels locked on your chosen line. 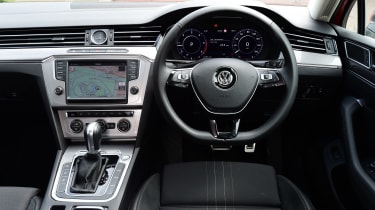 Yet this impressive agility doesn’t come at the expense of comfort. The suspension doesn’t soak up bumps as effectively as the Audi’s, but the Alltrack is rarely bothered by potholes. Head off the beaten track and the VW is almost as capable as the Subaru. There’s more ground clearance than in the Audi, while the Off-Road driving mode boosts grip.

Testers’ notes: “The Passat is the top choice for towing, with an impressive weight limit of 2,200kg for braked trailers. A retractable tow bar is £905, while Trailer Assist self-parking is £485.” 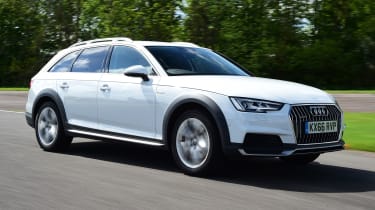 It’s fair to say the Audi A4 has had a lukewarm reception at Auto Express. While it’s beautifully built and has one of the classiest cabins around, it lacks the dynamic polish to mix it with the best. Can the Allroad version’s blend of rugged design and upmarket appeal revive the model’s fortunes? We test it in 2.0 TDI guise, which weighs in at a hefty £37,820; the car in our pictures is a Sport model.

It claims to be the most refined and upmarket choice here, and that’s reflected in the way the Audi drives. It’s the quietest and most comfortable car on the move. 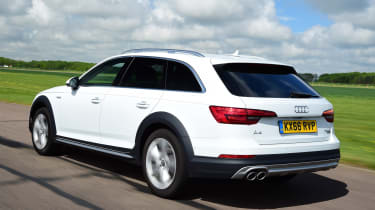 Yet it was no slouch on the track, where its combination of 187bhp, four-wheel drive, launch control and closely stacked lower gears allowed

it to sprint from 0-60mph in just 7.1 seconds, seven-tenths faster than the VW. The Allroad was also quick in the 30-50mph tests, but the tall sixth and seventh gears severely blunted acceleration at higher speeds, as demonstrated by its sluggish 27.3-second time for the top-gear 50-70mph assessment.

On the road, these long ratios are frustrating, because no matter how gentle you are with the throttle, the car constantly shifts between sixth and seventh when cruising at motorway speeds. At least the changes are quick and smooth.

The 2.0 TDI is the best insulated engine here, both at idle and when extended, while there’s also very little wind noise at speed, The sense of calm was enhanced by our car’s adaptive dampers, which delivered a supple ride around town and a cosseting, floaty feel on the motorway. Even in its firmest setting the suspension was softer than in either rival. 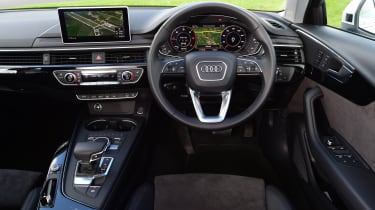 As a result, the Audi responded more lazily to inputs than the VW in particular, while body movements weren’t quite as well controlled. That said, there’s still plenty in the way of grip.

Head off the beaten track and the Audi is the least composed. You sit lower than in either rival, while the longer front overhangs are vulnerable when tackling slopes. Even in off-road mode, the Allroad struggled for traction compared with the VW and Subaru.

Testers’ notes: “Audi has fitted underbody protection, and it’s needed because the Allroad has the most modest ride height here, making its underside vulnerable to scrapes.” 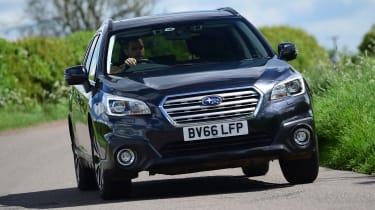 The rugged Outback has been the flagship of the Subaru range since its introduction in 2014. Mixing the brand’s famed off-road ability and engineering integrity with estate car practicality and a dash of luxury, the all-wheel-drive machine is an alternative choice to the usual premium suspects. There’s a choice of petrol and diesel flat-four engines, and it’s the latter we test here in £34,995 SE Premium Lineartronic guise.

The Subaru goes its own way under the skin, with a combination of low-slung boxer diesel engine, CVT gearbox and permanent four-wheel drive. However, with power and torque outputs of 148bhp and 350Nm respectively, it was the slowest at our track. 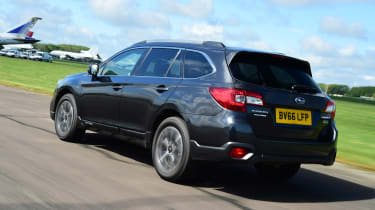 It accelerated from 0-60mph in 10.4 seconds, which was a full 3.3 seconds behind the more powerful Audi. That said, the Outback closed the gap during our in-gear tests, and was faster than the A4 from 50-70mph in sixth and seventh gears.

On the road, the Subaru’s performance shortfall isn’t as obvious, thanks in part to its CVT gearbox that keeps the 2.0-litre engine’s revs at around 2,000rpm, where peak torque is delivered. You can take control of the transmission’s seven ‘virtual’ ratios using the wheel-mounted paddles, but it’s so effective in auto mode that it’s best left to its own devices. 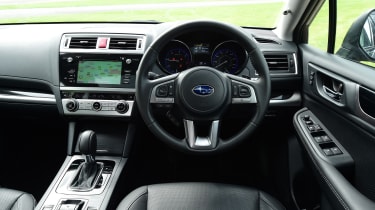 Refinement isn’t as strong as in the Audi, but once the boxer unit is warmed up it’s rarely intrusive, while wind and road noise are kept to a minimum. Turn into a corner and you’ll discover the Outback’s steering lacks feel, but there’s a surprising amount of grip. Body control isn’t as good as in its rivals here, but then the VW and Audi both had adaptive dampers.

It’s in the rough where the Subaru excels. The X-Mode off-road system and 200mm ground clearance meant it inspired the most confidence on our off-road course, tackling obstacles that would normally be limited to dedicated SUVs.

Testers’ notes: “The Outback is also available with a 2.5-litre petrol flat-four, which is fitted exclusively with the Lineartronic auto. Buyers wanting a manual are limited to the 2.0-litre diesel.” 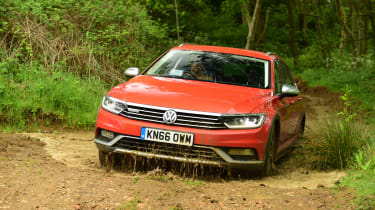 If you’re looking for a practical and classy estate car that’ll go as far off-road as many SUVs, then the Passat Alltrack has it covered. On tarmac it’s agile, comfortable and reasonably refined, while in the rough it rivals the Subaru for go-anywhere ability. It’s also the most spacious, will cost the least to run, is backed by the most attractive PCP deals and has loads of safety kit. 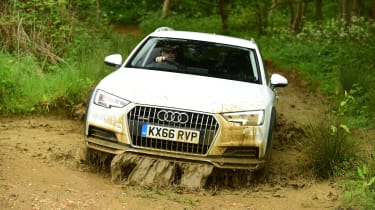 Based solely on comfort, refinement and upmarket appeal, the A4 Allroad is great. The Audi also has the slickest cabin design and is beautifully built. However, it’s not as sharp to drive as the Passat on road and it’s not as capable in the rough. It also has the smallest boot and the least standard kit. And while its residuals are strong, it’s expensive to buy. 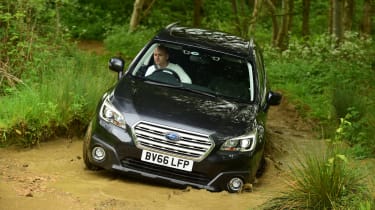 The characterful Subaru is an extremely likeable machine. It's not got the upmarket appeal of its rivals here and isn’t as composed on the road, but it’s refined and virtually unstoppable in the rough. There’s also some clever engineering under the skin, plus plenty of kit and loads of space. However, it’s the most expensive to run and has the weakest residuals. 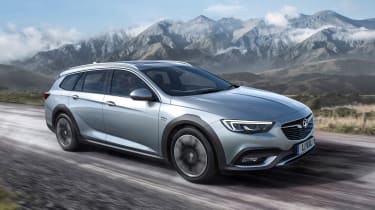 The handsome Insignia Sports Tourer estate has only just hit showrooms, but there’s already a tough Country Tourer version on the way. It’ll have just 20mm of extra ride height, so is likely to trail its rivals here in the rough.