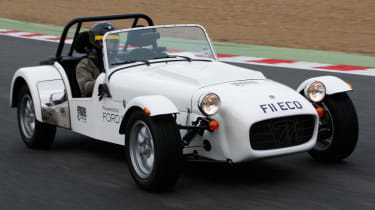 Ford's excellent 1.0-litre EcoBoost engine has already wowed us in the new B-MAX and Fiesta, and it shows yet more versatility here. The little three-cylinder punches hard in the lightweight Caterham, mixing strong acceleration with a great soundtrack. And there’s more power to come, so expect the engine to grace a high-performance Ford very soon.

In an effort to show the sporting potential of its award-winning three-cylinder turbocharged engine, Ford has fitted it to a Caterham Seven SV.

This is the same engine that’s available in the Fiesta and new B-MAX, so it comes with 118bhp and 200Nm of torque, although Ford claims the power could be increased.

This version of the Caterham is normally fitted with a 1.6-litre engine and, although it may appear as if you’re losing out with the 1.0-litre, the power is exactly the same. In fact, the smaller engine delivers 55Nm more torque.

The car hasn’t been fully tested yet, so there are no official 0-60mph times, but with the 1.6-litre Seven completing the sprint in 6.2 seconds, a time of six seconds flat is likely. From the driver’s seat, this car is every bit as fast as the standard SV.

The free-revving nature of the EcoBoost engine fits well in the lightweight chassis – total weight is just 588kg – so the added torque translates into a substantial shove in the back. There’s an addictive three-cylinder warble, although it’s hard to hear with a helmet on and the wind rushing past.

As with all Caterhams, this is a proper back-to-basics machine, and masses of fun. The tiny steering wheel, matched with short-throw gearchanges, gives you a real sense that you are driving an old-fashioned sports car, while ultra-direct steering and a low-slung driving position mean everything feels 20mph quicker than it actually is.

Although it’s merely a bit of fun for Ford – there are no plans to put a 1.0-litre Seven on sale – it proves just how versatile this remarkable little engine is.