We take a spin in the hi-tech, four-wheel drive Chevrolet Trax LT to see how the crossover performs 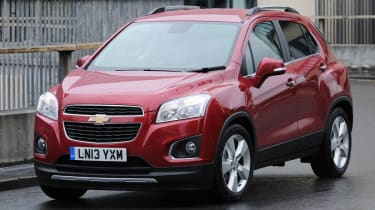 Cars of this size fitted with four-wheel drive aren’t as common as you might think, so the Trax already has itself a selling point. It’s got the clever MyLink system working in its favour, too, but it’s just a shame that the driving experience isn’t as good as it could be. The refinement and the ride both need improving before the Trax can take on the class leaders.

If you like your crossovers with a bit of American appeal then the Chevrolet Trax, which we’ve now driven on UK roads for the first time, could be the car for you. It's aiming to take on the likes of the Nissan Juke, Renault Captur and Peugeot 2008. The model we've tested here is in high-spec LT trim and comes with four-wheel drive and a MyLink touchscreen as standard.

The general shape of the Trax may look familiar to some, and that’s because it has many parts in common with the recently released Vauxhall Mokka. With its split grille and slightly squarer design, the Trax will undoubtedly stand out a little more.

There’s exactly the same choice of engines as in the Mokka, though, including the 1.4-litre turbo petrol driven here. The majority of sales will be of the slightly noisy but punchy 1.7-litre diesel, and a quick stint behind the wheel here reveals why. Despite having 138bhp, it feels adequate rather than quick, despite the pretty reasonable 0-62mph time of 9.8 seconds.

On the plus side, the petrol’s 44.1mpg isn’t too bad, though the diesel is much better, claiming 62.7mpg, and this engine is a lot smoother and quieter too. There’s still a fair amount of wind and road noise as you up the speed though.

The handling is reasonably good, resisting body roll surprisingly well in the corners. It’s a bit of a shame that the steering feels a bit too slow and numb because it could transform the Trax in to quite a fun car to drive.

The suspension feels firmer than anything we’ve found on the Mokka so rough roads mean a bit of a bumpy time for people in the cabin. It’s not unbearable but it just doesn’t soak up imperfections in the way an SUV – even a crossover SUV – should.

The cabin feels sturdy, though not particularly high quality, and on LT models and above you get a stylish looking MyLink touchscreen. It's a useful feature that allows you to connect up your smartphone and run apps like sat-nav and internet radio through the car’s screen.

It’s a pretty spacious car, too, featuring a 356-litre boot and rear seats generous enough for six-footers. The problem here is that brand new rivals like the Peugeot 2008 are just as spacious, while also being cheaper and a little better to drive.

Admittedly, the Trax does have the option of four-wheel drive working in its favour, and it is a likeable alternative to the crossover norms but it doesn’t quite have what it takes to stand above the very competitive crowd.