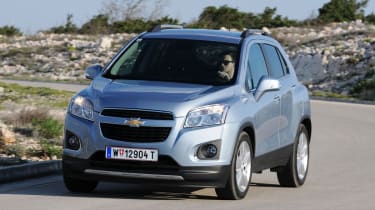 The Chevrolet Trax will be a bit of a hard sell for customers. Any tech-savvy buyer looking for a small SUV with decent space inside will definitely consider it. However, with the almost identical Vauxhall Mokka also on sale, as well as more refined and established competitors, the Trax may face a tough battle to carve a foothold in the market.

With the small SUV boom in full swing in Europe, the latest car to join the party kicked off by the Nissan Juke is the new Chevrolet Trax. We’ve previously driven an American-specification car, but we’ve now taken the wheel of a European model fitted with General Motors’ 1.7-litre VDCi diesel engine.

The Trax is closely related to the Vauxhall Mokka, but Chevrolet has gone for a more brash look borrowed from its larger Captiva 4x4 and Camaro muscle car. That means a large ‘bow-tie’ badge sandwiched between two grilles, more muscular wheelarches and big, blocky headlights. The end result is a small car with plenty of presence on the road.

While the design may be a little different to the Mokka’s, the engine line-ups are identical. The most popular choices are set to be our 1.7-litre diesel and a 1.4-litre turbo petrol. The diesel produces 128bhp and 300Nm of torque, and feels quite punchy low down in the rev range. You have to be careful to keep it in its power band, though, as it runs out of puff over 3,500rpm.

Unfortunately, the diesel is also rather noisy, both at low and high speed. On motorways, this is combined with excessive wind noise, which isn’t helped by the Trax’s bluff front end and large wing mirrors.

Handling isn’t particularly sparkling, either, with quite a bit of body roll apparent around even the slightest of corners. It’s possible that the front-wheel-drive versions will handle better than our four-wheel-drive model, as they ride 10mm lower. On the plus side, the steering is responsive and the six-speed manual gearbox has a nice, accurate shift action.

The Trax rides pretty well over individual potholes and large bumps, but if you find yourself on a road with many bumps in succession, it has a tendency to bounce up and down too much and struggles to ever settle down.

Inside, much of the switchgear is recognisable from other cars in the Chevy range. And with a large touchscreen taking care of the major functions, the centre console has a neat appearance. But the scratchy, cheap-looking plastics are less impressive.

One of the Trax’s major trump cards is the MyLink technology you get on the top LT spec. This allows you to link apps from your smartphone to the car, as well as controlling music and calls.

One of the apps is a sat-nav system, which downloads maps to your phone and costs around £50 per year – rather than the £700 to £1,000 you’d normally pay for a built-in system. It also allows drivers to use Siri voice commands on their iPhone.

Despite its compact 4x4 looks, the Trax is a very practical car. There are twin gloveboxes (one with the aux-in point inside so you can hide your MP3 player), wide door pockets and plenty of small storage cubbies littered around the cabin. Then there’s the boot, which holds 356 litres, but can be extended to 1,372 litres if you fold the rear seats.

Yet with the Mokka already on sale, the Juke leading the way and two new challengers in the form of the Peugeot 2008 and Renault Captur just around the corner, the Trax faces an extremely tough fight for sales.