We've driven the Chevrolet Trax, which is set to rival the Nissan Juke when it arrives in spring 2013 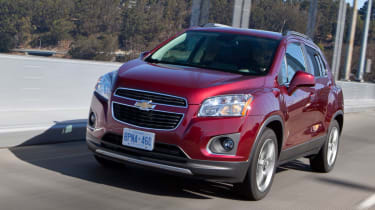 The Trax will be the best car Chevrolet offers in the UK, with an array of hi-tech kit, a practical cabin and a well rounded drive. The steering could do with a bit more feel, but there’s very little else to criticise. Let’s just hope the equipment and price work in its favour, because it has some very competent rivals to go up against.

Chevrolet already sells the large Captiva SUV in the UK, but sales haven’t exactly been booming. So can the US brand have a little bit more success with the Nissan Juke-rivalling Trax?

Take one look at the new car and it’s clear that it’s an entirely different proposition to the Juke – it’s slightly longer, wider and a whole lot more practical. The Trax offers a maximum luggage capacity of 1,372 litres, while the Juke has only 830 litres.

Chevrolet has based the Trax on the forthcoming Vauxhall Mokka, but it looks more masculine, with a bolder nose and split-level grille. Larger wheelarches, foglamps and black off-road cladding for the bumpers add to the visual appeal.

Inside, the Trax has the same angular centre console as the Mokka, but the instrument cluster is inspired by the Camaro muscle car, while the dash gets a soft-touch covering. There’s a high driving position and plenty of space for taller drivers.

The 1.4-litre turbo delivers the best mix of refinement and performance, and does 0-62mph in just under 10 seconds. Yet it still returns 44.8mpg economy – and the two-wheel-drive car promises even stronger returns.

The Trax doesn’t feel out of its depth on winding back roads, even though the steering is a bit numb. The suspension is firm – although not overly so – allowing the car to remain fairly level considering its high centre of gravity. You can feel bumps in the road, but the Trax has the edge over a Juke for ride comfort.

While UK specs haven’t been decided, flagship cars will have electric and heated memory seats. A host of driver assistance technology is available, including stability control, Hill Start Assist and a reversing camera. There’s even hill-descent control to help with a little light off-roading.

It all adds up to a car that looks certain to be the best Chevy sold in the UK. But its success depends on the pricing and kit included. We’ve been told to expect the Trax to start at around £16,000 for this entry-level model, which is more than the Juke and around £1,000 less than the Mokka.