Citroen DS 6WR is to be introduced in China, but no plans yet to bring it to the UK 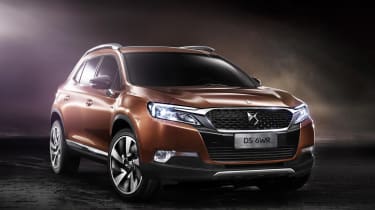 This is the Citroen DS 6WR. It’s the first SUV from the marque’s premium DS sub-brand and will debut at the Beijing Motor Show later this week alongside the DS 5LS R saloon. It'll only be offered in China initally but could make it to Europe in the next few years.

Designed in Paris, its styling is clearly influenced by the Wild Rubis concept first seen at the Shanghai Motor Show last year. The chrome-finished front grille, which merges with the headlight design, forms part of the new DS design identity. The subtle crease along the flanks, extending from the headlamp to the C-pillar is another design cue borrowed from the Wild Rubis concept.

On the stand in Beijing was only the exterior of the 6WR, with the interior due to be revealed at a motor show later this year. As Citroen Deputy CEO, Yves Bonnefont explained to Auto Express: "the interior is very special... it is an evolution of what we have in the DS5 and you will see very nice materials."

The DS 6WR rides measures in at 4550mm long, 1860mm wide and 1610mm tall, meaning it’s shorter, lower and narrower than its main rivals the BMW X3 and Audi Q5. The dimensions of the production model have been reduced slightly over the concept which previewed it.

Engine options come in the way of the 160bhp 1.6-litre e-THP and more powerful 200bhp 1.6-litre THP motor. Both transfer power via a six-speed automatic gearbox to the front wheels. Citroen has also decided not to offer four-wheel drive but in its place fit a grip control system, which benefits both fuel consumption and CO2 emissions.

Like the Citroen DS5 and DS 5LS, the DS 6WR will be the third DS model built in China at the Shenzhen site. Citroen isn’t giving a firm date as to when the SUV will be introduced but it will arrive in China first by the end of the year.