Watch out, Ford - Citroen has set its sights firmly on the top of the UK's sales charts with the sensational new C2. 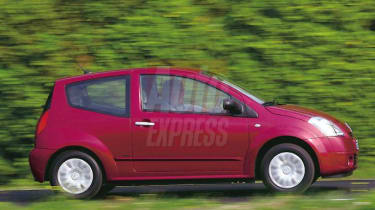 It takes more than a low price to make a successful supermini, but Citroen's C2 is about more than low-cost motoring. The car is good to drive and, although the sluggish diesel will leave some drivers frustrated, un-rivalled fuel economy should help make the C2 one of the best value cars on the market.

Watch out, Ford - Citroen has set its sights firmly on the top of the UK's sales charts with the sensational new C2.

In fact, the battle for honours prom-ises to be so fierce that Auto Express just had to pull out all the stops to bring you this exclusive first drive of the French company's new supermini, which looks ready to take the budget car market by storm.

Citroen has already created a sporty image for its new baby by revealing the C2 rally car concept at the Geneva Motor Show in March. As a result, even entry-level variants of the production car - like the model we've driven here - look sharp, with flared wheelarches and a staggered window line. In the metal, the chunky three-door is modern and fresh and puts many of its ageing rivals to shame.

Under the bonnet, the most frugal engine in the range is the 1.4-litre HDi unit already put to good use in the C3. In the combined cycle, the eight-valve oil-burner driven here returns a staggering 68.9mpg, while emitting only 108g/km of CO2 - that's 10g/km less than a Smart City Coup�. But despite the sporty looks and efficient engine, there's no escaping the fact that the HDi feels slow and unresponsive on the road. Although the diesel is smooth, the 1.4-litre petrol-engined C2 is the car to go for if you want speed. It also worth noting that a 16-valve version of the HDi unit will be introduced to the C2 range later to add some zest to the performance.

The vagueness of the five-speed gearbox is the only other gripe with the driving experience, which is otherwise impressive. Attack a series of bends and the C2 remains stable, with little body roll. Predictable understeer has been designed into the chassis, but the steering provides excellent feedback for an electro-hydraulic system.

Given the C2's compact dimensions, designers had to work hard to provide the practicality buyers expect. All but the entry-level models come with two individual rear seats, which slide backwards and forwards to create more room for either passengers or luggage. But space is still tight in the back, while the seats in all but the VTR are soft and lack side support.

The tailgate, meanwhile, splits in the style of a Range Rover in a bid to make loading as easy as possible, but we can't help feeling that a conventional hatch would have been more practical.

There will be a number of cashback or free insurance deals at launch, which means entry-level C2s will cost £6,995. But is the car decent value for money? At £8,695 including £300 cashback, the 1.4-litre HDi LX comes with a generous list of standard equipment and a well built interior. With Toyota's similar-spec Yaris at £9,200, the Citroen compares well. It looks as if the French firm has put itself at the forefront of the supermini class again.