It has never been a top seller, but there's more to Citroen's C5 than meets the eye. Although not the most attractive family car, it's extremely practical, with a vast estate version and room for five inside. There is also a huge model range and a wide choice of petrol and diesel engines - and all for tempting used prices. 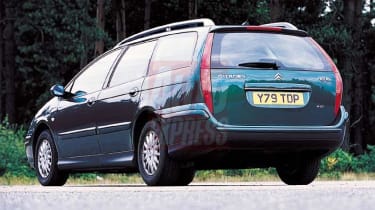 It has never been a top seller, but there's more to Citroen's C5 than meets the eye. Although not the most attractive family car, it's extremely practical, with a vast estate version and room for five inside. There is also a huge model range and a wide choice of petrol and diesel engines - and all for tempting used prices. Citroen's constant cashback deals make new C5s look cheaper by the day, but the discounts erode second-hand values. The effect of lower new car prices is a fall in residuals - great for used buyers, but not so for a C5's first owner. Get a well equipped diesel, and you'll have a family car bargain.Checklist * Interior: many owners have reported vibrations from the dashboard - if you want to fasten the centre console securely you have to lift up the gearlever's housing first. * Brakes: wheelbearings chafing against ABS sensors brought about a recall last year. Some Y and 51-reg cars were affected - contact Citroen to see if the work was done. * Electrics: the on-board computer is known to send the dashboard readouts haywire. Also, check for electric windows and radios that operate by themselves. * Suspension: the C5 continues Citroen tradition by using a complex hydraulic suspension. It's very efficient, so as long as there are no leaks, the set-up should prove problem-free for the lifetime of the car. * Gearbox: although the HDis are impressive, the standard manual box does not sit well with the diesel. Hurried changes can increase wear, so listen for grinding gears.Driving Impressions Your view of the C5's driving dynamics will depend entirely on the type of journey. If you are motorway cruising, then the Citroen's smooth riding and torquey diesel engines will impress. But on B-roads you won't be so excited - the soft suspension and over-assisted steering make for sloppy cornering. The dashboard is well laid out, but the driving position is geared towards armchair comfort rather than a sporty posture. With the exception of the base 1.8, all engines offer gutsy performance.Glass's View Since its launch, the C5 has struggled to gain popularity, but cashback offers and unbeatable practicality have been its saviour. Estate versions fare much better than their five-door counterparts, but demand still remains relatively poor. Diesel models attract the most interest, with good fuel economy and performance for the higher-powered 2.2 HDis - which make great used buys. Values remain terrible for the V6s, though, and they struggle to find homes despite their high spec. Jeff Paterson, Snr Cars Editor, Glass's GuideLife With A C5 It's a big car with loads of space and extras plus a great 2.0-litre diesel engine which pulls away well in any gear. Only the looks let it down. Michael Offless, Bradford, West Yorkshire I've got a 2.2-litre HDi auto estate. It's a smooth cruiser, but my car's on-board computer had to be replaced under warranty. There was a nine-month wait before the repair work was carried out. Keith Stephens, Bracknell, Berkshire

The C5 completes Citroen's move into the mainstream. It is spacious, practical and has good HDi engines, but only the Hydractive suspension - biased towards ride rather than handling - sets it apart. The car is refined, yet it would benefit from more feel through the controls. "So how will it fare in its class? Without the VW Passat's quality, the Ford Mondeo's driver appeal or the Renault Laguna's space-age styling, the C5 must be cleverly priced and marketed to sell well.