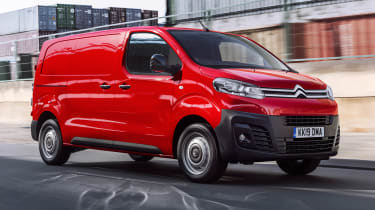 The 2019 model year Citroen Dispatch van has been revealed, with new emissions-compliant diesel engines and the addition of two more trim levels designed to bring more kit to the range.

The chief update is the replacement of the 1.6 BlueHDi with the PSA Group's latest 1.5 BlueHDi diesel. While it's smaller in capacity, power is up by 5bhp (badged BlueHDi 100), and more importantly it now meets the Euro 6.2 emissions legislation that all new vans will have to meet from September 2019.

It's the same story with the 2.0 BlueHDi, which has also been updated to meet the new emissions legislation. This still comes in BlueHDi 120, 150 and 180 guises, while all engines feature stop-start to help efficiency. At the top of the range, the BlueHDi 180 still comes with an auto box, but the older 6-speed unit has been replaced by Citroen's EAT8 auto.

In terms of body size, cargo volume and payload, the Citroen Dispatch remains unchanged, with short wheelbase XS, standard M and long-body XL variants on offer, plus a Crew Van variant that is a stepping stone to the similar SpaceTourer MPV. However, the trim range for the van has been expanded, with X and Enterprise now joined by Worker and Driver versions. These names were introduced with the smaller Citroen Berlingo Van last year.

Worker models are designed with the building site in mind, and come with Citroen's Grip Control traction control system, a 20mm raised ride height and Mud & Snow tyres, in lieu of four-wheel drive being offered. Also included are the Moduwork thru-load bulkhead for packing longer items, and a fold-down middle seat that doubles as a table. The Dispatch Worker is only offered with BlueHDi 120 power in M and XL sizes, and starts from £27,495.

Prices for the revised Citroen Dispatch range start from £21,320 and rise to £34,035 for the top-spec Crew Van in Driver trim.

Click here for our in-depth review of the Citroen Dispatch van... 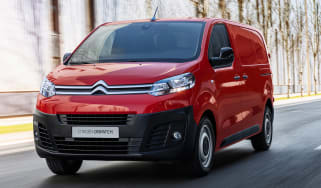 The mid-size Citroen Dispatch is a great van to drive, but cargo space isn't the biggest in the class
Citroen confirms prices for new e-Dispatch electric van

Prices for Citroen’s all-electric e-Dispatch commercial offering are identical to those of the mechanically similar Peugeot e-Expert; sales begin now …