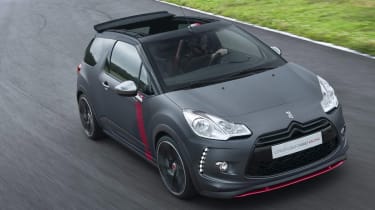 Citroen will have a new open-top star at the Goodwood Festival of Speed as the DS3 Cabrio Racing concept will make its global debut this weekend, ahead of its official unveiling at the Frankfurt Motor Show.

This model is being called a 'concept' at this stage, but it seems highly likely that is will evolve into a production car. It uses the same 202bhp turbocharged 1.6-litre petrol engine as the three-door hatch and weighs just 25kgs more thanks to its fabric roof.

That means Citroen are promising an identical 0-62mph time of 6.5 seconds and a 143mph top speed. The concept was developed in conjunction with the Citroen Racing WRC team which means it should handle just as well as the hatch, with high-performance brakes and tweaked running gear, and there are plenty of visual changes to help it stand out.

Finished in Moondark matte grey paint with contrasting red brake calipers, wheel hubs and badges, the DS3 Cabrio Racing sits on 19-inch gloss black alloy wheels and there are black chrome highlights on the handles, boot trim and door mirror caps. The striking 'DS' pattern logo is printed onto the black fabric roof and there are more upgrades inside too.

The bucket seats are finished in the stylish 'watch strap' embossed nappa leather from the larger DS5 with extra Alcantara trim and contrasting red stitching, which also extends across the dash, centre console and gear knob. Citroen has also made a racing bucket child seat that fits onto the ISOFIX points on the rear bench.

The concept will be on static display at the Citroen stand in Goodwood from the 11th-14th of July and will also appear at the Frankfurt show in Germany in September. Prices for the limited edition three-door were from £23,100 and the cabrio carries around a £2,000 premium so if Citroen did give the concept the green light for production it would be a direct rival for the Golf GTI Cabriolet.

All three of Goodwood’s flagship motorsport events are set to take place next year, having been cancelled in 2020 due to Covid-19
Goodwood FoS and Revival to merge into online Speedweek event for 2020