Spiritual successor to the 2CV-based Mehari is made of thermoformed plastic, but not likely to make it to the UK 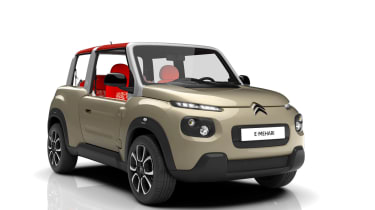 Citroen fans may remember the Cactus M Concept revealed a few months ago. Utilising the quirky Gallic charm that's been missing from some recent Citroens, it was a drop-top beach buggy with a waterproof interior and a plastic body - built with fun in mind. Now, Citroen has brought that concept to reality with the fully-electric E-Mehari, which will go on sale next year.

The E-Mehari is a result of PSA Peugeot Citroen's collaboration with the French Bollore Group, which will produce an electric car on the same platform called the Bluesummer. 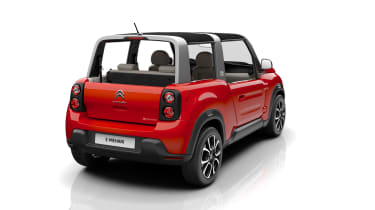 There are several changes made from the concept, first of which is the styling. Citroen's 'family face' with the upside-down headlight arrangement remains, and the concept's moulded plastic bodywork is present too. However, the E-Mehari has been given a new roof arrangement with B and C-pillars, while raised ride height has also been raised.

The plastic doors remain, though the moulded 'steps' for rear passengers are gone - and conspicuous by its absence is Citroen's 'airbump' technology first featured on the C4 Cactus. The car is available in the same bright colour palette to the Cactus, though.

Inside, things are a bit closer to the concept car. There's a choice of colours for the interior, which is also fully waterproof thanks to plastic-coated fabric. It covers the rear, sides, or the whole vehicle - and is available in either black or orange-red. 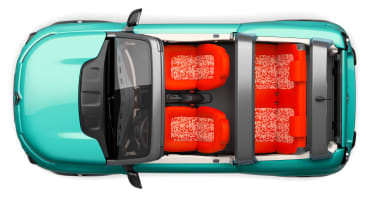 While the Cactus M Concept was powered by PSA's 1.2-litre three-cylinder petrol engine, the E-Mehari is a fully electric vehicle powered by 30kW Lithium Metal Polymer batteries. It's good for 124 miles of range and has a top speed of 68mph. It's slightly shorter than the Citroen C3, but thanks to the electric powertrain weighs considerably more.

The E-Mehari is likely to go on sale in France for around 25,000 Euros - before battery leasing - from Spring 2016. Customers hoping to run to the sun in a drop-top Citroen may be disappointed though, as there are currently no plans to bring this vehicle to the UK.

Would you take this electric buggy down to the beach? Let us know in the comments...