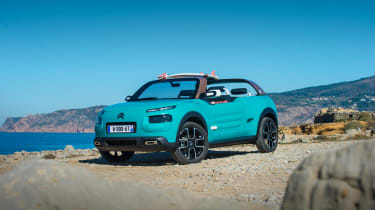 The C4 Cactus is quickly becoming the face of Citroen. It’s proven more popular in the UK than the company predicted, and the crossover’s success will shape the future of the Citroen product range. The Aircross concept, unveiled at April’s Shanghai Motor Show, previews a larger and more practical SUV on the horizon, but the versatility of the Cactus has allowed the brand to delve into its heritage as well.

The Cactus M concept is a tribute to the classic Citroen Mehari from the sixties, and Auto Express was lucky enough to be handed the keys. Only one, priceless example was built, so the car you see here on the coast just outside Lisbon in Portugal is the same one that appeared under the lights at September’s Frankfurt Motor Show.

Even though this is a valuable one-off, Citroen still let us mix it with real traffic on real roads in the Cactus M. It’s powered by a 110bhp 1.2-litre three-cylinder petrol turbo, hooked up to a new-six speed automatic gearbox not currently available in the Cactus – but this indicates that it soon could be. 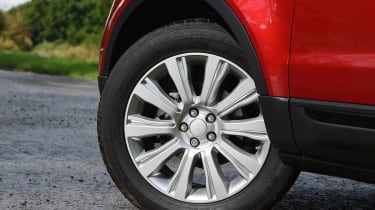 For a concept that reportedly took only four months to produce, the car feels pretty well screwed together. Admittedly, there are some more delicate parts such as the headrests and door pulls, but on the whole it doesn’t seem as brittle as most motor show one-offs.

The tall, skinny tyres and 19-inch alloy wheels give the Cactus M a slightly more elevated ride, while the soft and squeaky concept car suspension makes it ride like a Citroen of old. Yet the engine pulls willingly and the gearbox proves surprisingly smooth with its changes.

So the Cactus M feels and certainly looks like a feasible real-world prospect, building on the quirky nature of the standard Cactus. Let’s hope Citroen sees that as clearly as we do and gives the car the go-ahead for production.