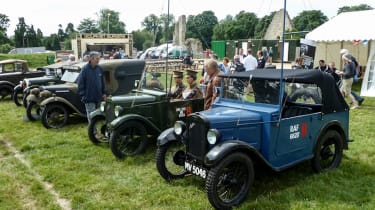 The Austin 7 was a great departure for the Austin brand, which at that point was focussing on larger cars. While the board was not interested in Herbert Austin’s proposal of a budget car for the masses, so he set up shop in his home, employing a 17 year old draughtsman by the name of Stanley Edge and some technical advisers.

After a number of very left field and somewhat eccentric ideas, Herbert settled on a conventional frame and engine to power his entry-level car, which as called the Austin 7. This little car was at first met with derision by some however its light weight, eager acceleration and wallet friendly pricing soon endeared it to the motoring public.

By the time the dust had settled in 1939, over 290 000 cars had been sold, transforming the British motoring scene.

Which Austin 7 to buy?

As a first step into pre-war motoring, the Austin 7 is a fantastic entry point. It’s still an affordable proposition with great parts availability. If you want speed and creature comforts however, then look elsewhere as this is motoring at its most basic level.

There were many changes made throughout its long production life, incremental upgrades continually improved the little Austin, but successive owners have generally improved most cars over the years.

There were a bewildering array of body styles for the Austin 7, you can choose between saloons, convertibles and vans to name a few. BMW even licensed the Austin 7 under the Dixie name, becoming the German company’s first ever production automobile.

The very earliest models in 1922 came with a 700cc engine, but this was soon increased to 750cc, with small power gains made along the years. Do not be too fixated on what engine your potential purchase has under the bonnet, because whatever model you choose, performance will be sedate by modern standards.

Initial pull-off is energetic but the acceleration soon tapers off and even the fastest Austin 7 will struggle to breach 60mph. The real fun to be had is from the lively nature of these cars at modest speeds, with an average weight of around 330kg, the almost single digit power output is enough to put a smile on your face on even the shortest journey.

Later models received some welcome upgrades such as a four-speed gearbox with synchromesh, as well as a much needed upgrade to the braking system.

The Austin 7 is a very basic car and while it is rugged, with something this old you need to be willing to get your hands dirty to keep it running smoothly. Parts and advice are in abundant supply. As these cars have been around for almost 100 years anything that can go wrong has probably done so at some point.

The good news is that since the Austin 7 has such an enthusiastic following the solution has more than likely been extensively documented and a replacement part made available. All potential owners should get in touch with their nearest 750 motor club and benefit from the wealth of knowledge and contacts that are available through this channel. Here's what you need to look at when buying a 7.

• Gearboxes: three-speed gearboxes have a weak spot on the clutch thrust bearing, but this can be replaced with the item from the later four-speed boxes. 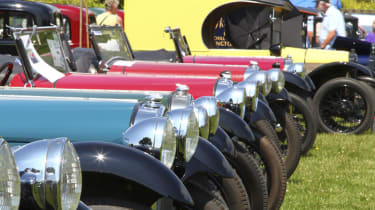 • Corrosion: rust and rot can attack body panels and various parts of the metal and wooden frames. A thorough inspection of the car by a specialist is recommended to uncover any potential problems here. Restoration is simple, but often time consuming.

• Fires: the Austin 7 has a propensity to catch fire, so check for signs of previous fire damage. One of the main causes is when an errant spark strikes engine oil around the starter motor, so it is vital to keep the engine bay clean. Another potential fire hazard can be averted by not overfilling the fuel tank.

• Overheating: overheating can be caused by overly retarded ignition timing, a blocked radiator or a slipping fan. All are simple to fix.

• Dampers: shock absorbers have rubber links that can deteriorate leading to erratic steering and wayward handling.

• Trim: finding interior trim isn’t always the easiest task, but most parts from replacement seats to dashboard parts can usually be tracked drown through the various clubs or specialist autojumbles.

• Modifications: a number of upgrades such as electronic ignition, 12v conversions and headlight upgrades are widely available, and if the car you are looking at has had some of these modifications carried out, it is vital to ensure that it has been done to a profession standard.

• Electronics: a number of electrical and charging issues can affect these cars due to age and corrosion. Contact cleaning and wiring replacement is sometimes required however there are a number of helpful tips on the club sites to diagnose and cure electrical maladies.

• Engine: the engines are strong and tend to go on for ages as long as they are well lubricated and received regular maintenance.

• General: methodical inspection of the common issues affecting these cars, as well as some background knowledge is key to an enjoyable experience of your Austin 7. While these are just a small insight into the areas you should check with these cars, they are not inherently troublesome and anyone with even a moderate understanding of car mechanics should be able to tackle the majority of these checks.

• www.750mc.co.uk - The original motor club, which championed the Austin 7 for competition use.• www.7ca.co.uk - 7 County Austins, a great source for new and used spares.• www.pwa7c.co.uk - The Pre-War Austin Seven Club, an international owners club for 7s.• www.da7c.co.uk - Dorset Austin 7 Club, with a fantastic technical resource for the 7.• www.austinsevenfriends.com - International club and forum supporting the Austin 7.

The entry point for Austin 7 ownership today is around £9000, for a car that will need some work. Well cared for and immaculately restored examples can go for around £16,000. Very limited edition cars, or ones with specific racing history can command much more.

Running costs need not be exorbitant as the aforementioned clubs and parts suppliers are always on hand to help keep your Austin 7 on the road, and expenses are further kept in check by the fact that no road tax or MoTs are required. Insurance is generally very reasonable too thanks to readily available classic policies.

These fun little cars transport you back to a time when motoring was an adventure. If you’re looking for a car to brighten up your weekend and leave you with a smile on your face, then look no further. The Austin 7 is what you have been waiting for.